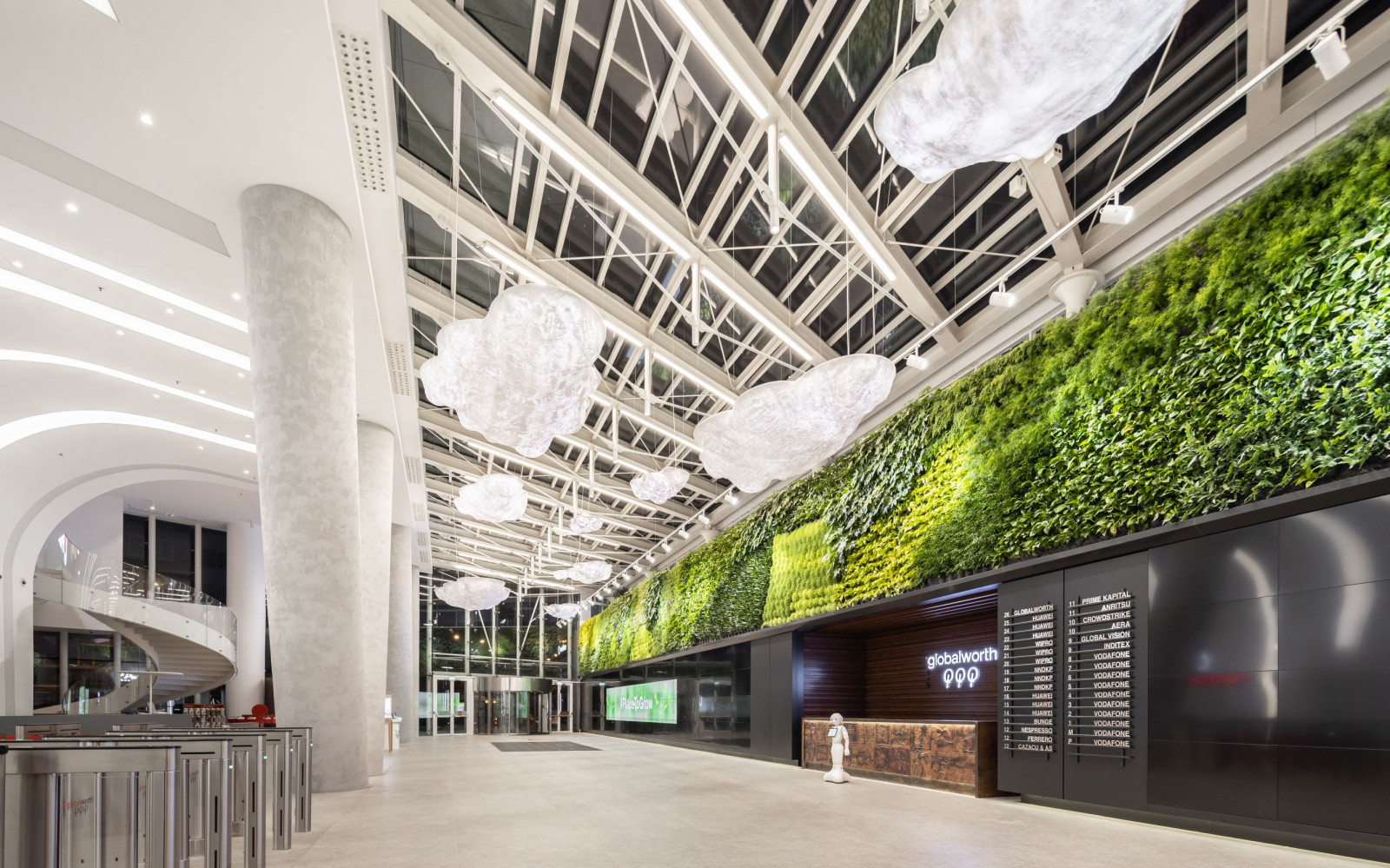 Globalworth, a leading office investor in Central and Eastern Europe (CEE), is inaugurating the most advanced lobby in the region, with a number of innovations and technological premieres that include:

• the world’s largest kinetic floor in an office building

• the longest screen wall in CEE

• a space to relax with heated marble steps

• Schindler projectors – a pilot project in the CEE

The Globalworth Tower building, which welcomes some 30,000 visitors daily, has become a benchmark for office space innovation and sustainability.

“Technology is part of our company’s DNA, and as a result we can today showcase the offices of the future. The largest business community in Romania, the Globalworth community, can now enjoy a workplace which generates energy through motion and where visitors can relax and work in a comfortable lobby, surrounded by natural elements and assisted by a robot.” said Dimitris Raptis, Deputy CEO and CIO at Globalworth.

The building’s lobby, a small circular ecosystem, provides a whole series of innovative solutions to the employees and visitors that cross it:

• A kinetic floor, a world premiere for an office building, made by the Pavegen technology company, transforms the weight of steps into electricity, which is subsequently used to power other innovative mechanisms in the lobby. The two floor surfaces installed in the Globalworth Tower have a cumulative area of 40 sqm, the largest of any office building worldwide.

Each step on the Pavegen floor surface generates approximately three joules of electricity and five watts per person, which is equivalent to turning on three LED bulbs for a second or six seconds of conversation on an iPhone 8.

• The largest natural green wall in an office building in South and East Europe, with 12 different types of plants. The maintenance process is sensor connected and fully automated. The 158 square metre wall uses recycled water which is nutritionally improved and treated through a process of osmosis. Photosynthesis is encouraged by light projectors, which are optimally aligned and tuned up the vertical garden.

• The biggest interior wall of screens in south-east Europe, with an area of 110 square metres and the length of 50 meters.

• A four-level relaxation grandstand, unique in Romania, which benefits from an adjustable heating system, built from marble and equipped with power sockets for laptops and contactless chargers for mobile phones compatible with wireless charging technology.

• Pepper, the new Globalworth employee. The humanoid robot will greet guests at the front desk and provide useful information.

• Through a pilot project that is unique in Central and Eastern Europe, carried out in partnership with Schindler, four of the Globalworth Tower elevators are equipped with projectors that run videos on exterior doors.

• The reception is decorated with suspended LED clouds, which can be programmed to generate customised visual effects.