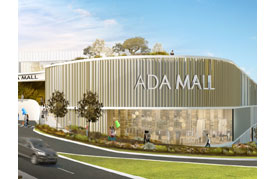 GTC Serbia is scheduled to lay the cornerstone for its new retail project in Belgrade, Ada Mall, in March this year. Its opening is scheduled for the end of 2018.

According to its representatives, the company has already begun site preparation works on the land plot on Radnička Street, opposite to the popular recreational zone Ada CIganlija.

Ada Mall will have a gross leasable area (GLA) of approximately 34,000 sqm, offering more than 100 retail units, as well as 1,000 parking spaces. As previously announced by the developer, the shopping centre will welcome several brands that will enter the Serbian market for the first time.

The project will be designed and built according to the latest international standards, featuring wide corridors, natural lighting and attractive common areas.

Headquartered in Poland, GTC has so far carried out investments in 10 countries across the region: Serbia, Poland, Hungary, the Czech Republic, Romania, Croatia, Bulgaria, Slovakia, Ukraine and Russia.