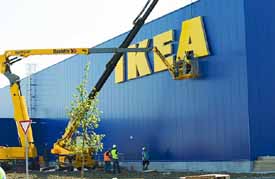 IKEA Croatia, part of the Swedish IKEA Group, has announced plans for 2017 to open a new store in the Croatian coastal town Split. The facility will occupy about 2,500 sqm and is expected to be located next to the shopping center City Center One Split, reports local media.

The store in Split will have around 1,000 sqm of retail space and a large warehouse where consumers will be able to pick up their ordered and purchased items on the same day, reports Slobodna Dalmacija.

“IKEA will open a delivery center, or pick-up point – a place where customers can book, pay and take their goods. The total, of which slightly less than half will serve as a showroom for inspiration for our visitors and customers. The expected opening date is the second half of 2017,” revealed Igor Štefanac, the PR manager of IKEA in Croatia, which will delight all those who have had to so far pay more than 10 percent of the value of goods for transportation to Split.

Stefan Vanoverbeke, Director of IKEA Croatia, stated that in IKEA’s second year of opening, they have achieved 567 million kuna in revenue, which is 5.8 percent more than in the first year of operations in Zagreb.