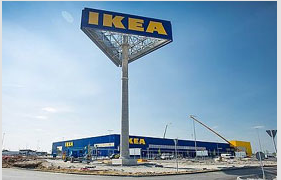 IKEA, Swedish furniture retailer, has announced that it will open two new delivery centers in Croatia, located at Mavrinci Street no. 16b in Rijeka and within City Center one Split.

The first opening in Rijeka will take place in July this year, while the second IKEA delivery center in Split will open its doors to customers in August. The units will occupy between 600 and 1,000 sqm, employing 10 people in total.

As stated by the company’s representatives, the openings are part of an aim to make them more accessible to customers across Croatia. At the delivery centers, shoppers will be able to pick up items ordered via the IKEA website and as a result delivery times and costs will be significantly reduced.

In the coming period, the Swedish powerhouse aims to open several new delivery centers, as well as to continue its expansion in the South East Europe (SEE) region, opening three new IKEA department stores in the next three years.

At present, the furniture giant operates one store in Croatia, located at Alfreda Nobela no.2 Street in Zagreb. Within the SEE region, IKEA is also present in Romania and Bulgaria, and is currently constructing its first store in Belgrade, Serbia.