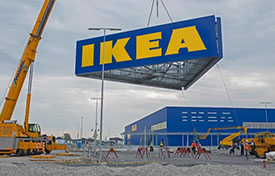 IKEA, the Swedish furniture retailer, is planning to invest between €70 and €80 million in the construction of a new retail park in Belgrade, the Serbian Government have announced.

The new retail development would be built on the same land plot as IKEA’s first store in Serbia, which is currently under construction.

According to the Serbian Prime Minister Aleksandar Vućić, IKEA is interested in purchasing additional land plots in Serbia.

At present, the Swedish powerhouse owns a 31 ha land plot in the Bubanj Potok area, in the vicinity of the Belgrade-Niš highway. The construction of its first store in Serbia kicked off in April 2016, while the opening is expected to take place in the summer of 2017.

IKEA’s store in Serbia will consist of 36,300 sqm, offering approximately 9,200 articles at an affordable prices. In addition, the unit will also provide 1,500 parking spaces, as well as a restaurant with a capacity for 500 people, a cafe and a children’s playground.

The new store represents an investment of €70 million. As stated by the Serbian Government, IKEA currently employs 50 people in Serbia and intends to hire an additional 250 workers over the coming period.

Within the South East Europe (SEE) region, IKEA is also present in Croatia, Romania and Bulgaria. The furniture giant intends to reach a total of 13 stores in SEE by 2025 and is scheduled to open new stores in Ljubljana and Bucharest this year.