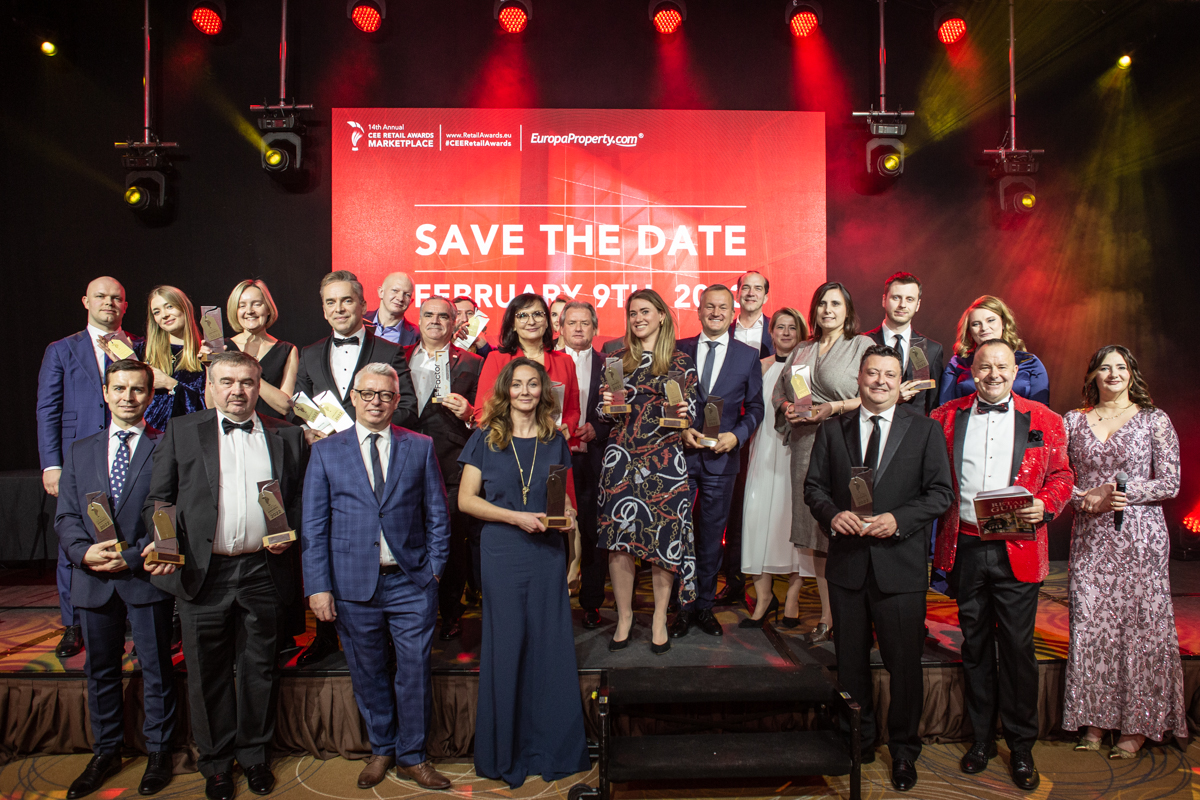 Recognizing the importance of Central Europe’s retail markets EuropaProperty was proud to host the 14th annual EuropaProperty CEE Retail & Marketplace LIVE & ONLINE. The spectacle was witnessed by a select crowd of retailers and associated industry professionals; who gathered to see the top-performing companies from the region recognised for their phenomenal achievements in the retail real estate sector.

Currently, the retail industry is going through unprecedented challenges. In this way, the CEE Retail Awards and Marketplace recognised and appreciated those who have remained faithful to their core values in the face of the crisis and unfavourable market situation.

Accentuating the strength, brilliance and resilience of the retail sector, many retailers were highlighted on the night. Online Retailer went to the eobuwie.pl and MODIVO platforms. Other major winners for the retailer-specific awards included: Zabka, the convenience retail store chain, one of Europe fastest-growing retailers, won the Specialty Retailer Award, and Cosmetics Retailer went to Rossmann.

Multi-disciplined investor, developer IMMOFINANZ was recognised by the jurors for its investment and development success in the region. Throughout 2021 the company has continued its strategy of seeking investment opportunities in development projects, for example, continuing its successful STOP SHOP brand of retail parks and VIVO! shopping centres.

The company won the Investor and Developer awards respectively. The company was also recognised for innovation and forward-thinking practices that have shaped the changing face of the retail industry over the last year. The company walked away with the Retail Innovation award for its new concept Top on Shop by IMMOFINANZ which combines residential with retail development.

In this way, the company received the Retail Park Developer award. The developer also picked up two project awards in the Retail Park and Small Retail Project categories – Vendo Park Chorzow and Vendo Park Piekary Slaskie, both delivered in 2021, were both winning projects at the event.

2021 was a good year for retail park and convenience store development in Poland and the project award winners reflected the changing dynamics of the country’s retail development market. Many of this year’s nominees formed extensions, refurbishments, and new retail park concepts.

Equilis and Acteeum Group’s Galeria Andrychow won Retail Project of the Year in the medium category. Other projects recognised on the night included MMG Ciechanow from the Master Management Group, which won the Refurbished Project award and the Expansion Project of the Year went to Designer Outlet Warszawa by DWS Group and ROS Retail Outlet Shopping.

Another project winner highlighting the new development trends on the market was Echo Investment’s hugely popular and spectacular multi-functional development in the centre of Warsaw, the Warsaw Brewery, which was awarded Mixed-use Project of the Year. Also in Warsaw, Wilanow Park by NHood won the Future Project award.

Futureal’s Etele Plaza in Budapest won Retail Project of the Year in the large category and Centrum Praskie Koneser by Liebrecht & wooD Group and BBI Development in Poland, one of the best retail destinations in the region, received the coveted Ultimate Retail Destination award.

Many industry leaders and associated companies from the real estate industry were also awarded on the night. Sierra Balmain picked up the Asset and Property Management of the Year awards, highlighting the growing importance of good asset management, and the extensive nature of the firm’s retail portfolio under management.

Global consultants CBRE picked up the Agency of the Year award. Additional company awards were presented to Dentons, one of the world’s biggest law firms, which received the Law Firm of the Year award. Tax and Financial Adviser of the Year once again went to TPA Poland and Professional Service Provider of the Year went to MK Illumination. Cushman & Wakefield topped a successful year of growth and walked away with the Project Management Firm award.

The event is the only one of its kind with a real focus on the retail market with awards for top retailers, innovators, developers, bankers, projects and specialized service firms. Bank Pekao was voted Bank of the Year and Shopping Centre Director of the Year was once again awarded to Blue City’s Yoram Reshef.

EuropaProperty’s esteemed panel of highly-respected business leaders from around the region judged the nominations for the awards categories on their merit and positive impact on the market. World-renowned audit firm EY monitored the scoring and voting process.

The CEE Retail Awards and Marketplace once again enabled the industry’s key players to come together. The event proved itself as an unmissable opportunity to showcase the company and its services to the real estate sector and wider industries, as well as strengthen business partnerships and ensured unrivalled coverage and exposure.

Bringing people together has never been more important and this year’s CEE Retail Awards and Marketplace created a unique opportunity and platform for everyone to be entertained and share the experience of a highly coveted event, whilst learning about the developments and trends which will help shape the sector going forward.