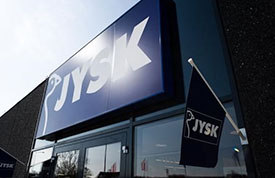 The first JYSK store in the Republic of Tajikistan, a mountainous country in Central Asia, opened the doors on December 17th. The store has a sales area of 1,250 sqm and is located in the capital Dushanbe, which has approximately 670,000 inhabitants.

“There is nothing in Tajikistan, which resembles JYSK. This is the main reason why we believe, that there is a good market for our stores in the country. Many customers attended on the opening day, so that is promising for the future,” said Frederik Kroun, Franchise Director at JYSK.

JYSK in Tajikistan is run by a local franchisee, who is already a known retailer in the country.

Country number 47 of JYSK’s network is the Republic of Moldova, where the first JYSK store has just opened. The store is located in the capital Chișinău.

“JYSK is already experiencing great success in the neighbouring countries Romania and Ukraine, so we hope that will also be the case for our franchise business in Moldova,” said Frederik Kroun, who has made a deal with a local family business on the operation of JYSK in the country.