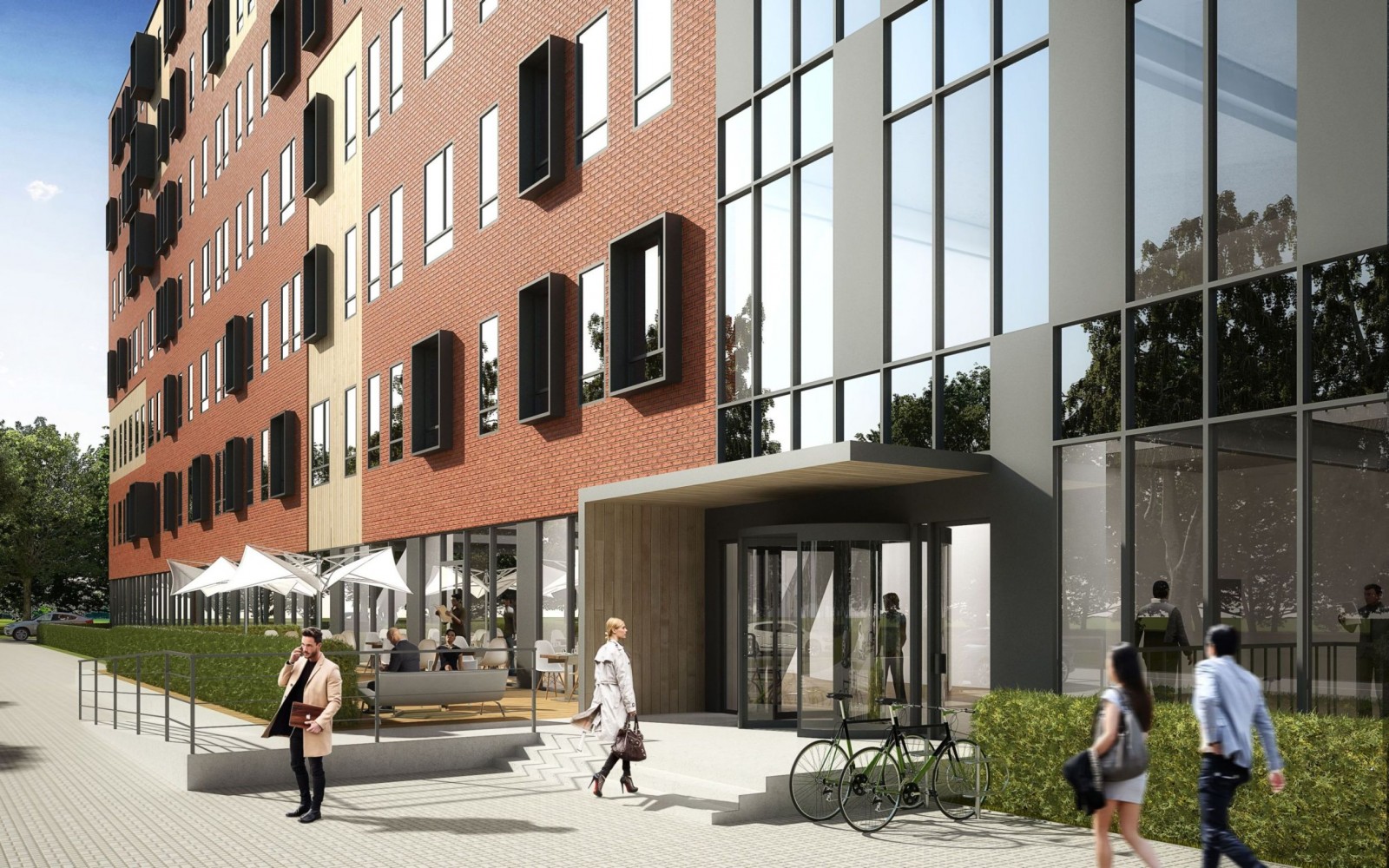 Golub GetHouse has embarked on construction of a dormitory at ul. Romanowicza in Kraków. Unibep S.A. is the general contractor for the investment, which involves renovating the former Telpod factory and adapting it for the needs of modern, high-standard university accommodations. The industrial interiors will contain 290 functional housing units with various layouts for one, two, three or four persons, offering a total of over 700 beds. Golub GetHouse is implementing the project in partnership with Chicago’s CA Ventures International, a company specializing in student housing construction in North and South America. The investment is financed from Golub GetHouse’s real estate fund.
Livinn Kraków is being built on a site at ul. Romanowicza 4 in Kraków’s Zabłocie district. The seven-storey former Telpod factory building will be thoroughly revitalized and modernized under the supervision of an experienced team of engineers from Unibep S.A. The cooperation in implementing the project with CA Ventures International, an American company, will result in a new generation residence hall with 713 beds available in different space configurations of one to four rooms. Each of the 290 residential units will come with a living room with a study space, a bedroom, a kitchen and a bathroom. The housing units will be fully furnished and will have access to high speed internet.
Czarek Jarząbek, Founder and CEO of Golub GetHouse, said, “Together with CA Ventures, we will create modern student housing distinguished by high standards and functionality new to the Polish market. Our partner is extremely experienced in construction of such buildings in the US and South American countries, where they have built facilities offering a total of more than 10,000 beds. We want to make use of this knowledge and combine it with our understanding of the Polish market. With exceptionally developed student amenities, Livinn Kraków will be a great space not only for study but also for personal development, creativity, pursuing various hobbies, and community integration.”
Livinn Kraków will offer its residents an unprecedented range of amenities. Students will receive unlimited access to the study rooms (individual and group), to a gaming and entertainment centre, to a cinema, and to a common kitchen. The ground floor will come with publicly available guest space. Additionally, the building will house a modern gym, bike storage room and launderette for the exclusive use of Livinn Kraków residents. Livinn Kraków will also house an internal garden and a panoramic terrace offering a view of Kraków. Great emphasis was placed on the safety of residents. The entire building will be monitored 24/7 by reception, security staff and CCTV television.
In immediate proximity to the building is Andrzej Frycz Modrzewski Kraków University with about 8,000 students. Thanks to its convenient location, the dormitory will be well connected with the most important colleges in Kraków. It is also located in close proximity to the Old Town and Kazimierz district, offering access to the city’s cultural facilities and services such as museums, art galleries, clubs, restaurants and the Vistula River.
Czarek Jarząbek added: “We will closely cooperate with Kraków’s higher education institutions. Such cooperation is aimed not only at offering comfortable housing to students, but first of all at developing their creativity and skills. That’s why we will shortly announce joint initiatives.”
The hall of residence’s investor also cooperates with cultural institutions in Cracow. The first result of such activities is handing over the “UNITRA TELPOD” sign to the Museum of Municipal Engineering in Cracow. The neon has been located on the facade of the building at ul. Romanowicza 4 for the last several decades. During the demolition works, the sign has been safely dismantled and secured, and soon it will become a part of the Museum of Municipal Engineering’s collection.
The reconstruction design of former Telpod factory building was prepared by the renowned Kraków architectural practice IMB Asymetria. The building will be renovated while retaining elements of the historical, industrial identity of Kraków’s Zabłocie district. The developer aims at keeping its unique characteristics and adding new functionality at the same time. The architectural design involves creating brick façades and maintaining particular storeys above standard heights. As a result, the internal spaces of the building will have ceilings as high as 3.9 m. The interiors will also have an industrial character, with many accents referring to the previous functions of the building.
Apart from amenities designed exclusively for students, Livinn Kraków will also house publicly available commercial and service spaces on the ground floor, including a 650 sqm large-format store. The developer has also planned a café with a direct entrance from the side of ul. Romanowicza, which may be managed by an external operator.
Leszek Gołąbiecki, President of the Board at Unibep SA., said, “We are proud that we will be working together on such a challenging project as Livinn Krakow. We have a lot of experience in the construction of housing estates, which will certainly be useful in its implementation. The project is challenging in terms of architecture and execution, and the deadline is demanding too, but I believe that good cooperation will enable us to construct the building in accordance with the adopted assumptions.”
Completion of construction work is scheduled for summer 2019, and the facility will be ready for the first students to move in at the start of the 2019/2020 academic year.
The dormitory to be constructed in Kraków’s Zabłocie district is not the only development by Golub GetHouse in this market segment in Poland. A similar project will be completed on ul. Jagiellońska in Warsaw on a plot recently purchased by the company close to the Koźmiński University campus.