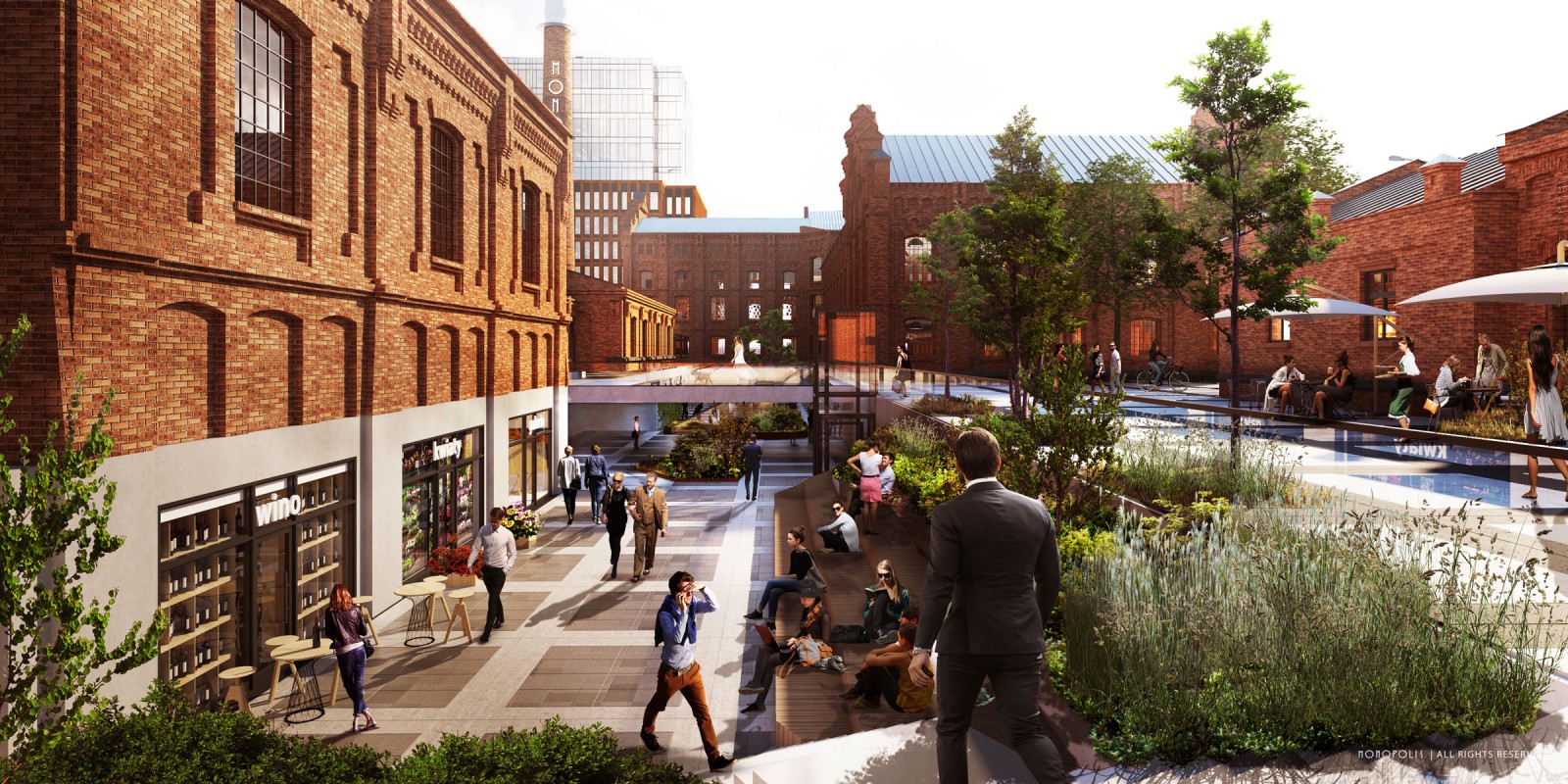 The investment attractiveness of Łódź continues to grow and is mirrored by the excellent results recorded on both the city’s office and industrial markets. Further improvement in the city’s business environment will certainly be boosted by the comprehensive revitalization of the centre of Łódź.

Łódź is continuously working to improve its image and brand in the eyes of both Polish and international business. The efforts of city authorities go hand in hand with a number of activities from private investors, which are visible in the city’s office and industrial markets. Does Łódź have a chance to achieve further investment success? All indications show that this will be the case. Adding to this bullish outlook, the city has just launched the area revitalization initiative – one of the largest urban regeneration projects of its type in this part of Europe.

“We are at the beginning of the largest urban regeneration project in the history of Łódź. It is a major challenge not only from the investment side, but also from a social and economic perspective as well. Commercial developers are building a new centre of Łódź; expanding along the Central Business Axis of Łódź, and contributing, with their developments, to the revitalization efforts of the city. In fact, it is the first time since 1989, when private capital works hand in hand with city authorities to renovate the city centre. Commercial developers believe in Łódź, because they see that we are consistently implementing our growth strategy to make Łódź a beautiful city and a great place to live,” says Hanna Zdanowska, the Mayor of Łódź.

Łódź is the seventh largest market in terms of modern office stock and one of the most rapidly developing markets in Poland. Although most of the regional markets outside of Warsaw are growing and attracting new investors, Łodź seems to be outpacing some of the traditionally larger markets.

“The very good results of the office market in Łódź stem from the city’s improving investment position. So far, companies such as ABB, Accenture, Cybercom, Ericsson, Fujitsu Technology Solutions, Infosys and Nordea Bank have already taken the step of investing in the potential of Łódź. This naturally builds the business brand of the city and attracts further international players. And wherever investors focus their attention, high-quality, state-of-the-art office space soon follows. This is confirmed by the developer performance of such leading companies as Echo Investment, Ghelamco Poland, HB Reavis, Skanska Property Poland and Virako,” comments Tomasz Czuba, Head of Office Leasing, JLL.

In the past, the developer activity in Łódź was at a rather moderate level, usually averaging at between 20,000 and 30,000 sqm of new offices each year. In 2014, it dropped to 2,600 sqm. The last four years have however been subject to increased interest from global corporations, leading to the launch of a number of new investments. In 2017, the total office stock in Łódź stood at nearly 440,000 sqm, demand was 58,500 sqm while a record-breaking volume of 74,000 sqm of modern office space was delivered to market.

“The vast majority of on-going projects are located in the Central Business Axis of Łódź, the largest office area in the city, where approx. 120,000 sqm of office space has so far been developed. By 2020, this part of the city will likely grow by an additional 100,000 sqm. It is also worth mentioning Nowe Centrum Łodzi ((The New Centre of Łódź – NCŁ), which has so far provided 44,000 sqm, can increase to 150,000 sqm in the next few years”, adds Tomasz Czuba.

Even though the competition from other major metropolitan areas is fierce, Łódź appears not to be losing any ground. On the contrary, it is home to one of the most spectacular redevelopment projects in the country – Monopolis – redevelopment of Monopol Wódczany, a former vodka factory, into a vast mixed-use complex.

“The strength of Łódź is based on the fact that it does not attempt to copy other cities, but derives inspiration from its unique potential and characteristic buildings, which cannot be found in any other Polish cities on this scale. The city continues to build on its attractiveness and, in the future, may contribute to the increased relocation of residents from other cities. People looking for an alternative to a crowded Warsaw or Kraków may come here. Today, the city is certainly on the short list of foreign investors, who have been operating successfully in Łódź for several years now,” comments Krzysztof Witkowski, President of the Board, Virako, the developer of Monopolis.

The increasing business attractiveness of Łódź is reflected in the relatively low level of vacant space. By the end of 2017, it was 9.5 percent. This means that companies looking for large office space have to consider projects that are under development in order to find the right space in the city. Furthermore, Łódź is also one of the most attractive markets in terms of office space rents. Currently the prime headline rents vary between €11.5 and 13.2 € sqm/month.

Warehouses in Łódź lead the way

An excellent central location, a developed (and still improving) transport infrastructure, competitive prices for industrial space and relatively broad labor market are the key factors in the attractiveness of the Polish industrial sector. All of these factors are even more prevalent in the region of Central Poland, selected as an investment location by giants such as Arvato, BSH, Castorama, Dell, FM Logistic, Gillette, Leroy Merlin, Media Expert, Sonoco, Unilever, Whirlpool and Zalando.

“Central Poland, with warehouse stock totalling approx. 2 million sqm, is one of the five major markets in Poland, along with Warsaw, Upper Silesia, Poznań and Wrocław. What differentiates Central Poland from almost all of the other regional markets is the fact that a large amount of existing stock is found within the city limits. This is a positive trend which addresses the dynamic development of e-commerce and the rapidly changing shopping preferences among Poles. In the era of e-commerce, we expect the fast delivery of our purchases, and warehouses located within the city limits are able to fully address this need,” comments Tomasz Mika, Head of Industrial Poland, JLL.

Both Łódź and the entire region are exceptionally well-connected, offering excellent access to motorways and the relatively high availably of its labour force, which is a key factor for e-commerce and light manufacturing sectors. It also benefits from the historic manufacturing character of the city, which contribute to the character of the location. All these elements have resulted in very high demand, which registered one million sqm last year. What is more, it is worth noting that this is not a record in isolation but part of a trend that has been developing since 2015.

“There is still space and demand for new projects in the region, which is illustrated by the 300,000 sqm that was in the pipeline at the end of 2017. What is interesting is that thanks to the new Panattoni project – Central European Logistics Hub – almost 40 percent of the space in the pipeline was located within Łódź’s city limits,” adds Tomasz Mika.

The effects of such significant demand are reflected in the gradually falling vacancy rates. At the end of 2017 only 1.4 percent of total existing space in Central Poland remained vacant, making this the lowest percentage among Poland’s major industrial markets. In addition, interest in this market shows no sign of letting up: 92 percent of the space in the pipeline is already secured by lease agreements. In addition to the advantageous location and competitive labour market, another factor which makes the Central Poland so attractive to tenants are the rental conditions. Rents in this region are among the lowest of all the industrial markets in Poland. Space in big box facilities here stood at €2.60– 3.20 sqm/month at the end of 2017. Naturally, projects located within Łódź city limits are offered at higher rental rates, and currently stand at €3.40–3.90 sqm/month.