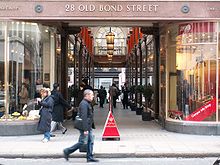 Colliers International’s latest report on the most sought-after retail locations in Europe has revealed that Old Bond Street in London has remained the most expensive shopping street in Europe. With prime rents now reaching €908 per sqm a month and where demand for flagship space continues to exceed supply; London’s Old Bond Street boasts significantly higher rents than any other European High Street, according to Colliers Retail Snapshot. The Top 5 Most Expensive Streets to rent a shop are Old Bond Street, London; Bahnhofstrasse, Zurich; Champs Élysees, Paris; Via Monte Napoleone, Milan and Stoleshnikov Lane, Moscow.

Paul Souber, Head of Central London Retail said: “London is still the signature location for any brand that aspires to international luxury status. At present, the demand for prime London locations seems insatiable and even the headline rental levels achieved by new lettings do not tell the whole story about just how strong demand is.”

He added: “What we’re seeing is retailers paying – ‘key money’ – multi-million pound payments to take control of existing leases just to get a foothold on Old Bond Street. The leases changing hands may already be at current market rents, but retailers will still pay millions more for the rarity value to secure a store on the street.”

He continued: “Some of the markets recorded declines in prime high streets rents. For instance, despite strong retail sales and continuous demand from international brands, Istanbul in Turkey saw significant drop in prime rents, on both mid-year and annual basis. The decline is related to Turkish Lira depreciation against Euro and USD. We have also seen downward movement in high street rents in Geneva, which is a further correction towards more reasonable rental values on Rue du Rhône, and in Warsaw, where prime high streets rents declined slightly and are now on par with shopping centres.”

Europe’s High Street Winners
In Eastern Europe, Sofia in Bulgaria saw the most significant increase in prime high street rents (48 percent y-o-y). This, however, is a return to previous levels after a sharp decline at the turn of 2012 and 2013.

Prime rents in Riga, Latvia also continued upward movement, particularly strong in the high streets, reflecting the increasing demand for street retail units in this market – Polish fashion retailer Reserved is to open new store in May, while H&M and Next are currently looking for street locations.

The most significant weakening of prime high street yields took place in Kyiv. The increase of retail supply and significant increase in interest rates in Turkey pushed up prime retail yields in Istanbul.