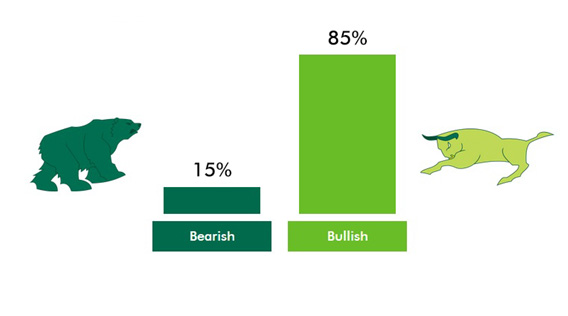 The mood at MIPIM 2014 was overwhelmingly positive with 85 percent of property professionals declaring that they are feeling ‘bullish’ about the European commercial real estate market, according to a recent opinion poll by CBRE.

CBRE surveyed more than 300 property professionals at MIPIM 2014 to discover current sentiment in the European commercial real estate market. The survey reveals that of the respondents polled the majority are feeling ‘bullish’ about the European commercial real estate market in 2014. This sentiment compares favourably with 2013, with more than three quarters (77 percent) describing their current mood as either ‘more positive’ or ‘about the same’ as last year.

Are you feeling bullish or bearish about the European CRE market in 2014?

The CBRE survey revealed that the much stronger tone and sentiment in the European commercial real estate investment market is returning to the levels seen in 2007 before the Global Financial Crisis (GFC). More than half (53 percent) of respondents stated that they were either ‘more positive’ or felt ‘about the same’ as in 2007.

Jonathan Hull, Managing Director, EMEA Capital Markets, CBRE, commented: “The feeling of positivity was palpable at MIPIM 2014; there is certainly less caution and more confidence. During the first half of 2013, investors were focused on core markets and assets, and the big change we have seen coming into 2014 is that investors are now looking for growth. We have moved away from crisis and investors are beginning to feel much more positive about the eurozone. Where we had a significant divide between the north and south of Europe, we are now seeing recovery and growth.”

Respondents were also asked what types of property assets (by sector and market type) were most attractive to purchase in 2014. The spread of answers was varied with a significant majority stating a preference for Offices (40 percent), followed by Retail (32 percent) and Industrial (28 percent) assets. While it is clear that there is still substantial demand for core markets such as the UK, Germany and France (40 percent), those viewing ‘recovering’ (34 percent) and ‘emerging’ (26 percent) as most attractive reflects increased confidence among investors and a desire to move up the risk curve in 2014.

If you had to invest in one market type and one sector in 2014, which would it be?

The positivity at MIPIM among property professionals is supported in the findings of CBRE’s ‘European Real Estate Investor Intentions 2014’ survey. The report revealed that investor confidence in Western Europe is up sharply compared with last year, with the market chosen by 71 percent as the most attractive global region for investment.

This report revealed significant shifts in geographical preferences, with a strong rise in the proportion (19 percent) of investors seeing Spain as most attractive for purchases in 2014 – up from 6 percent from 2013. Madrid is now in second place to London as the most attractive city for investment, a dramatic change from last year, with Barcelona also in this year’s top ten choices. Investor appetite for opportunities in ‘recovery markets’ is further evidenced by the inclusion of Amsterdam and Dublin among the top ten.

Mike Atwell, Head of CEE Capital Markets at CBRE, said: “Accordingly to Real Estate Investor Intentions’ Survey, Warsaw ranks in the top 8 destinations of Europe, which real estate investors plan to target in 2014. It shows that CEE real estate investment will continue to focus on Poland, but we see also growing investors’ appetite for other markets in the region.”

The report also revealed that offices were the most attractive sector in 2014, recording a notably higher share of the vote (39 percent) than in 2013 (29 percent).