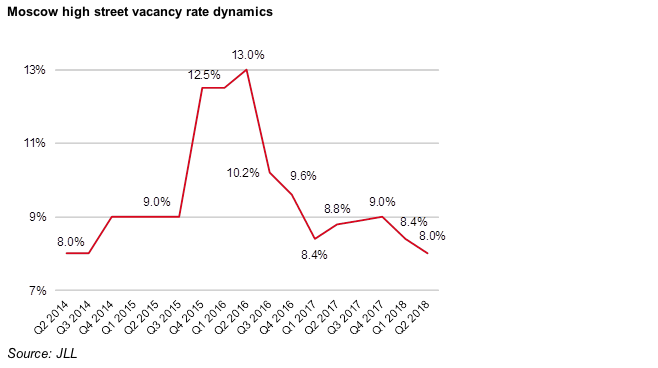 According to JLL, the vacancy rate on the main Moscow high streets continued to decline, reaching 8.0 percent in H1 2018. Over the last six months, the indicator dropped by 1 ppt, to a four-year low. JLL analysts expect that tenants will continue occupying Moscow central streets, which in turn will lead to a further reduction of vacant space.

The demand for the Moscow central streets remains stable, with a gradual expansion of retail chains. Tverskaya, Arbat and Kuznetsky Most streets showed the best occupancy dynamics in H1 2018. The largest decline was observed on Tverskaya Street, with the vacancy rate down by 3.8ppt, to 4.5 percent. Electronics, household & furnishings and grocery stores were among new tenants on this street. Tverskaya made it to the top-3 streets with the lowest vacancy rates, taking the second place between Myasnitskaya and Pokrovka. The vacancy rates on Arbat and Kuznetsky Most streets declined by 3.2ppt and 3.1ppt, to 5.2 percent and 9.7 percent, respectively. Restaurants & cafés and fashion operators were the new occupiers in these locations.

“The 2018 FIFA World Cup has mainly affected the turnover of existing tenants rather than vacancy rates and rents due to its relatively short duration. Thus, during the World Cup the turnover of some foodservice operators has increased significantly on Nikolskaya Street, while the vacancy rate has remained stable at a 12-months minimum. Besides, most tenants on Moscow high streets have long-term leases,” commented Yulia Nazarova, Head of Street Retail in Moscow, JLL, Russia & CIS.

“Nevertheless, fashion tenants were ready to open their stores before and during the World Cup. For example, the Russian fashion operator Jamilco opened a New Balance flagship store on Tverskaya, 17 at the end of last year. Another two new brand stores also began operating on Stoleshnikov Lane in Q1 2018 and on Arbat Street in Q2 2018. A Timberland mono-brand store was opened by the company on Arbat Street in June,” added Yulia Nazarova.

Apart from the tourist streets, the Garden Ring continued posting occupancy improvements after the completion of renovations. Its vacancy rate declined by 2.3ppt, to 9.5 percent in H1 2018. The most active tenants by rotation were small-format supermarkets, such as АV Daily and VkusVill.

On the demand side, restaurants and cafés remained the leaders on the Moscow street retail market, with almost a half (47 percent) of leasing inquiries in H1 2018. As a result, the share of foodservice operators increased to 34 percent of existing street retail tenants. The main restaurant locations in Moscow are still in high demand, while the vacancies are scarce. This has influenced the average rent in the Patriarshie Prudy district and on Maroseyka Street, which have increased to RUB130,000 and RUB90,000 per sqm per year respectively.

“The Patriarshie Prudy district is emerging as one of the main restaurant areas of the city. There, approximately half of all tenants are restaurants & cafés. Two new projects by Uilliam Lamberti, Montifiori and Coco Lambert, the eighth Bocconcino restaurant, opened in collaboration with Ginza Project, Mollusca, the restaurant serving Chilean mussels, are among notable openings during the first six months of the year,” noted Oksana Kopylova, Head of Retail and Warehouse Research, JLL.

The rotation on Moscow retail streets declined to 5 percent in Q2 2018, down by 3ppt Q-o-Q. The highest levels were observed on Maroseyka and Novy Arbat streets, where the indicators reached 12 percent and 10 percent, respectively.