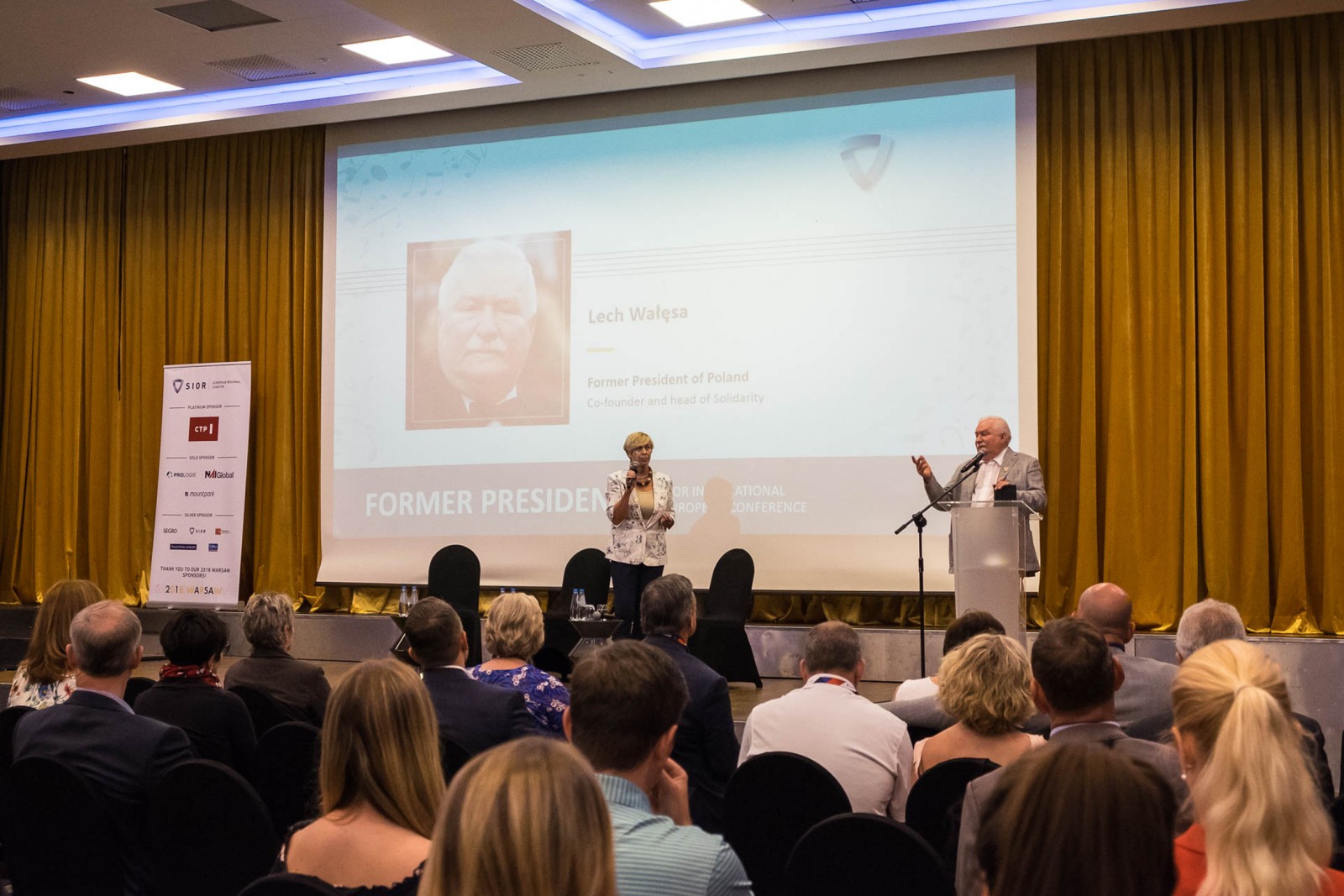 Future gazing dominated the Society of Industrial and Office Realtors’ (SIOR) International European Conference in Warsaw. The former President of Poland, Lech Wałęsa, delivered his anticipated keynote speech, while panellists and delegates discussed emerging sectors within the industrial, office and real estate markets and debated how to tackle the global problem of attracting the best talent.

Lech Wałęsa, who was awarded the Nobel Peace Prize in 1982 for his work with the Solidarity party, began his rousing speech by describing the steps he took to transform Poland from a communist country into a liberal one, before talk turned to the ‘transition era’ we’re experiencing now.

In the face of current turmoil within the European Union, he said it’s important to embrace globalisation and to do this we need to change the institutions, platforms and structures on which the world is currently organised. The latest technology should be encouraged and used for positive means and, moving forward, government and business leaders must listen to their people, communicate, debate and challenge accepted norms with them while looking to the future, if progress is ever to be made.

Professor of International Economics at the Graduate Institute in Geneva and President of the Centre for Economic Policy Research (CEPR) in London, Richard Baldwin, supported Lech Wałęsa’s sentiments during his own session on day 1 as he discussed the potential pitfalls in store for businesses that choose to ignore the onslaught of globalisation. He explained: “People in general are misthinking globalisation but, if we’re to tackle current issues, it’s really important that we all understand what’s likely to happen in the future.”

Baldwin then professed that emerging sectors and knowledge should be embraced if we’re to maximise the talents of mankind – wherever they may live – and that the future will be office jobs, not factory jobs. Domestic telecommuting, online freelancing platforms, machine translation and artificial intelligence will all play a vital role in increasing the mobility, productivity and quality of any workforce, while breaking down the global language barrier will result in a “tsunami of talent” for emerging markets within the next decade.

A panel of industrial experts then debated the current impact of digitalisation on the real estate sector and their predictions for the future. They agreed that labour and the use of advanced technology will continue to shape and define conversation, and that developers will need to adapt to avoid failure.

In support of ingenuity and bravery within the sector, Mathieu Giguere, Head of Real Estate in CEE for Amazon, said: “We can’t be 100% sure what customers are going to want in five years, but we need to pre-empt it.” He explained that warehouses will need to be flexible and able to facilitate the use of robots within the next 10 years, so investment should focus on adaptable and flexible buildings that “surf the wave” of change.

Martin Polak, Senior Vice President and Regional Head for Prologis, followed by reiterating the importance of making smart decisions when embracing new technologies. He summarised by saying that good locations will remain important, and there are more of them in the CEE region; fittings can be upgraded and replaced, but we should keep [thriving] warehouses where they are.

Debate also turned to consideration of Generation Y and how their wants and needs have had a huge impact on the office fit-out sector. Good news for tenants, as the panel led by Dr Paul Redmond agreed that serviced offices are becoming more and more of a viable business model in the long term, as they offer tenants unrivalled flexibility and shorter leases – both of which are edified by the impact of globalisation. However, this doesn’t mean theend of the traditional office model, which more established companies will always value.

Renata Osiecka, SIOR Europe President, concluded: “Lech Wałęsa inspired all of us to preempt inevitable change and tackle it head on with a positive and inclusive mindset, whereas leaders in the property and intellectual realms provided invaluable insight into the rise of artificial intelligence, our changing workforce and the effect emerging markets will have on the industry.

“We’ve decided that these developments shouldn’t be perceived as challenges – they need to be embraced and will result in more efficient and profitable ways of working. It’s important that we remain flexible and open to new ways of working and living if we are to prosper and thrive for years to come.”