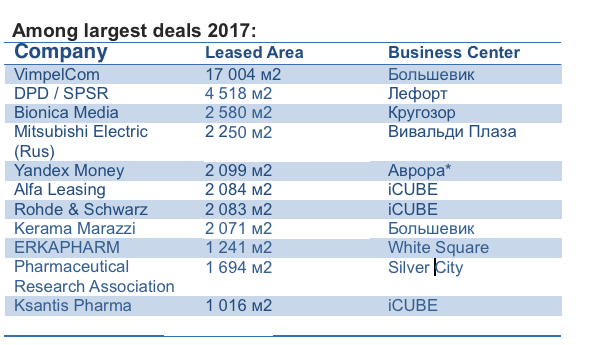 Investment Company O1 Properties published operating results for 2017. Office lease transactions were in excess of 133,000 sqm, of which more than 68,000 sqm represented new contracts. Total transaction volumes in 2017 were 66 percent more than in 2016 and space leased in new transactions was 36 percent greater than in 2016. As a result, the vacancy rate for the O1 Properties portfolio (including assets under management) fell to 12 percent and the rate for class-A facilities in the Central Business District of Moscow was under 7 percent. These figures are below the market average (according to JLL, the vacancy level for class-A offices in Moscow in 2017 was 16.5 percent).

The largest leasing volumes were at the Bolshevik, Lefort, Krugozor and iCUBE business centres. The bulk of transactions took place in the third and fourth quarters of 2017.

Lease of office space by O1 Properties to the leading Russian mobile operator, VimpelCom, was the largest deal of in 2016-2017 on Moscow’s class-A office market. The mobile provider will occupy the whole of a standalone building, which is being renovated in the second stage of modernization and refurbishment at the Bolshevik business and cultural centre.

The Russian internet company, Yandex, continued to increase volumes of space, which it rents at the Avrora business park, extending its office premises there by a further 2,000 sqm for Yandex Money company. The business park is now 100 percent occupied. Vacant space at the Vivaldi Plaza business centre also fell to zero after O1 Properties closed a lease deal with Mitsubishi Electric.

Dmitry Mints, Chairman of the Board of Directors of O1 Properties, commented: “The commercial real estate market recovered in 2017 and there was a decline of the vacancy rate at our business centres and across the market. Landmark events included the signing of a lease agreement with top Russian mobile operator, VimpelCom, at our Bolshevik business and cultural centre, representing the biggest lease transaction of the last two years in the Moscow class-A segment. Market consolidation in 2017 was due to limited supply in a context of stabilization of the ruble exchange rate and lowering of the Central Bank interest rate. We expect the trend to continue in 2018: demand will exceed supply, and the year should bring gradual increase of rental rates, assuming that main macroeconomic indicators remain stable.”