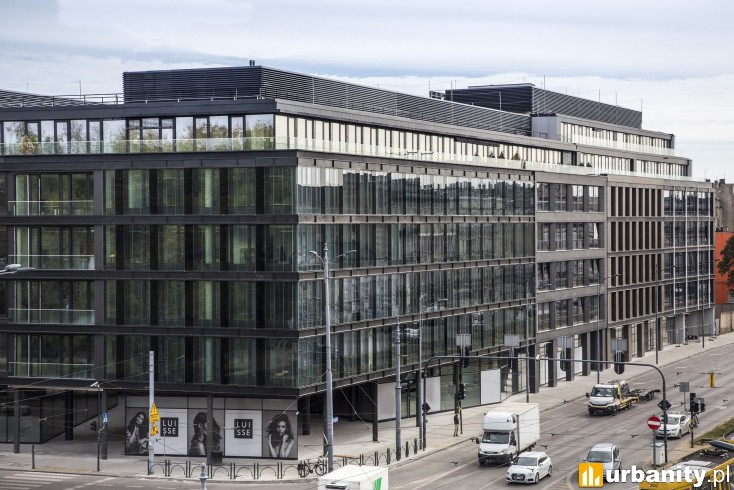 Warimpex officially opened Ogrodowa Office, a modern office building in the centre of Lodz, located in the vicinity of Piotrkowska street, the Manufaktura, and Vienna House Andel’s Lodz. The building provides more than 28,000 sqm of space, of which nearly 4,000 will be occupied by commercial and service outlets as well as food amenities. The building has received the occupancy permit and the first tenants of office and service premises have already moved in.

“Lodz continues to attract new companies. They need modern, high-quality office space. Ogrodowa Office addresses this need while offering an excellent location in the very heart of the city. Today, when opening our new building, I would like to invite all entrepreneurs who want to change the face of Lodz with us, contributing to its future growth. We are delivering space which is open to the city, hoping that it will blend in with the urban tissue and will serve both, office workers and residents of Lodz who often visit this central point of the city,” said Franz Jurkowitsch, CEO of Warimpex.

“Thank you for this investment. We are slowly approaching 500,000 sqm of office space in Lodz, but Ogrodowa Office due to its style and the place where it is located is a pearl in the crown of office buildings in Lodz,” said Hanna Zdanowska, the Mayor of Lodz.

The architectural design provided for creating a modern building, refers to the historical architecture of Lodz. The structure of Ogrodowa Office includes two bodies made of five and six above-ground storeys, whose glass facade reflects the historical division of plots and refers to the variety of architectural styles of Piotrkowska street. The two main office lobbies can be entered via the interior passage. The unique location in the heart of the city provides attractive view corridors from the offices along the frontage of Ogrodowa and Zachodnia streets towards Poznański’s Palace, the Manufaktura, and the park.

The building was designed to fit in with the surrounding architecture while complying with top quality standards and using state-of-the-art technology solutions. Ogrodowa Office combines the aesthetics of architecture with functional spatial solutions. The building also adopts a number of green solutions, allowing for, among others, energy efficiency. In addition, there are locker rooms and showers for those who cycle to work. The underground car park will provide spaces for 326 cars as well as electric car charging stations. The office building will apply for BREEAM, a certificate granted to buildings in which modern solutions and high comfort go hand in hand with the care for the natural environment.

In the process of acquiring tenants in Ogrodowa Office, WX Office Development 2 – a company belonging to Warimpex, the owner of the building, is represented by consulting company CBRE. “We are every day in Lodz and this is one of the most important regional markets in Poland for us. Ogrodowa Office is currently one of the most prestigious locations in Lodz, next to such city icons as Manufaktura and Andel’s hotel. It is worth noting that Ogrodowa Office is the first such large office investment opened at the same time, without the phasing stages. This proves both, that Warimpex has vast experience in the Lodz real estate market and there is a demand for qualitative space in a convenient location from tenants, who previously had their headquarters in buildings of a lower standard. The office building is already commercialized almost in half. Everyone interested is invited to Ogrodowa,” said Aleksandra Suszczewicz, Property Negotiator, CBRE.