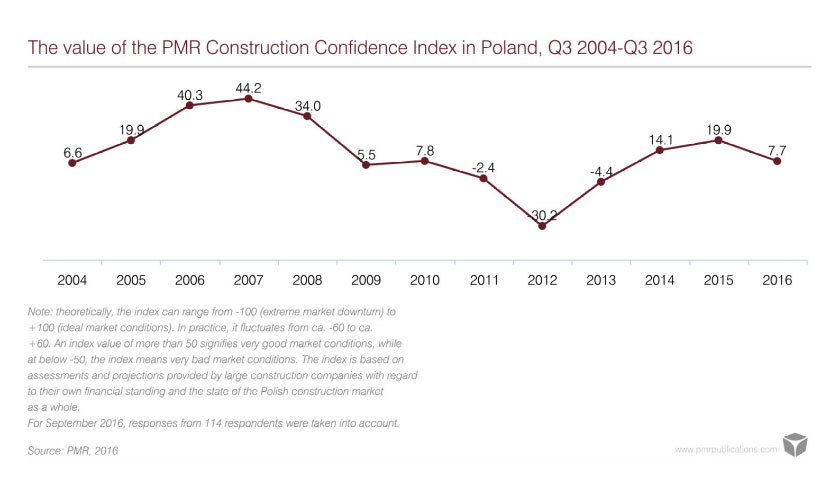 While the level of optimism in the construction industry has clearly fallen in 2016, it still remains reasonable, mostly on the back of high expectations of 2017. Construction companies are aware that the current slowdown is a transient technical correction, which, sooner or later, will evolve into a spree of intensive spending of EU money.

Slower-than-expected economic growth, lower numbers of calls for tenders announced and contracts awarded in the public procurement sector, thinner order books of construction companies and reduced profitability of the construction sector – all these developments are reflected in the results of a survey of high-level professionals from the management and operating divisions of the largest 200 Polish construction companies which PMR conducted for the report “Construction sector in Poland H2 2016 – Development forecasts for 2016-2021”.

The index was the lowest for civil engineering companies, which reported a significant decrease in projects by local authorities, the PKP group and GDDKIA in the latest survey. At the same time, civil engineering companies’ expectations regarding 2017 are relatively positive – a vast majority of the companies forecast a higher number of contracts from public institutions next year.

As shown by the survey results, contractors intend to take advantage of the slowdown to get prepared for the forthcoming market upturn. Therefore, the contractors take various measures they believe will let them achieve a competitive edge. As in the previous edition of the survey, taking active action to obtain new orders from the domestic market, submitting bids in a larger number of tenders and expansion into new market segments were the most popular measures taken by the surveyed companies to gain a competitive edge. Compared to last year’s wave of the survey, investment in company management and investment in human resources also enjoyed greater popularity. One out of every ten companies went for acquisitions to retain advantage over competitors.