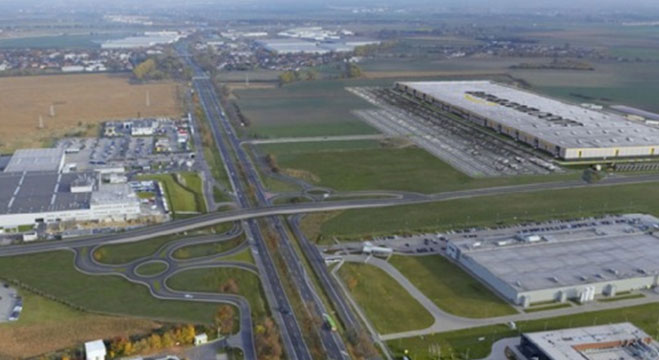 Panattoni Europe has reported on the progress of the Amazon projects being developed in Poznań and Wroclaw. Near Poznań, works are now in progress on the interchange on the national road no. 92 featuring two roundabouts. The interchange itself will be nearly 113 metres long. The investment is to provide access to the warehouse facility, which is scheduled for completion this coming August.

The ongoing construction of the warehouse facility for Amazon in Sady near Poznań, Tarnowo Podgórne commune, started at the end of 2013, and with the works progressing rapidly it was possible to start the next phase, involving the construction of an interchange on the road no. 92. It will feature two roundabouts and cross streets with entry and exit ramps, service roads, access roads and a local road along the overbridge. The interchange will include street lighting, thus ensuring safety for its users. It will be nearly 113 metres long and more than 257 tons of steel will be used in its construction. The investment is worth PLN 19 million.

Commissioning is set for August, the Amazon Poznań facility is 70 percent completed. Panattoni’s facility for Amazon in Poznan will take up 100,543 sqm – currently the structure has a roof and façade, and finishing works are in progress on the office space and outdoor areas, including car parks. More than 91,570 sqm will be taken up by warehouse space, while office and staff facilities have been planned on two storeys taking up 8,972 sqm. The facility will feature 2,154 car parking spaces, 97 truck spaces, 16 motorcycle spaces, and 60 reloading docks. The warehouse is under development in Sady near Poznań, 2.5 kilometres from the expressway S11 and 16 km from the motorway A2.

Commissioning set for October, Amazon Wroclaw facility is 50 percent complete. The construction developed with Panattoni in Bielany Wrocławskie started last January and will be completed in October 2014. The façade is now being built. Panattoni Europe ensures high-class road infrastructure around the facility, with a roundabout now under development. The facility is in the direct vicinity of the Nowa Wieś junction, connecting the motorways A4 and A8.

At present, Panattoni Europe is developing 265,000 sqm of new warehouse space in Poland, including two facilities for Amazon in Poznań and near Wroclaw, as well as two speculative investments at Panattoni Park Poznań III and Panattoni Park Wroclaw III. Since the beginning of this year, the developer has delivered 100,000 sqm of space in projects dedicated to such companies as Castorama Polska (50,000 sqm) and Polaris (33,600 sqm).