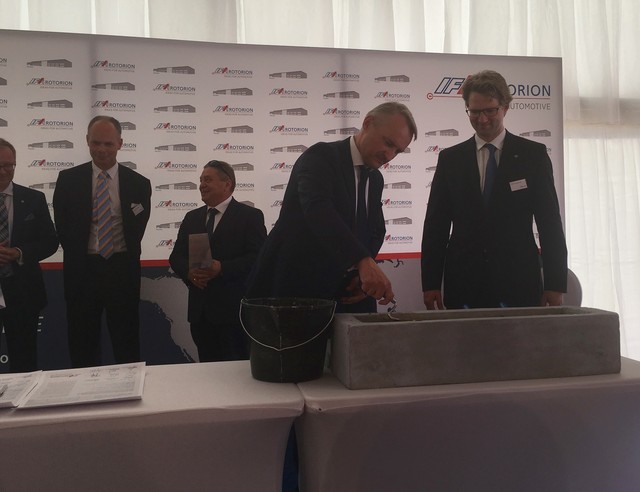 Panattoni Europe to build a factory for IFA – EuropaProperty

Panattoni Europe is going to build a manufacturing site for IFA Rotorion of Germany, a manufacturer of vehicle components for such car brands as Mercedes Benz, Ford, Volkswagen, GM, BMW and Porsche. The project, with an area of 34,000 sqm, will be developed in Ujazd, the Special Economic Zone of Katowice. The cornerstone for the new factory was laid on 21 July at the project site.

The new IFA Rotorion factory is going to launch its operations as early as January 2017, employing 90 people in the first phase, targeting 400 employees by 2020.

IFA Rotorion’s presence in Poland is determined by such factors as the expansion of its partnership with Daimler AG. Felix von Nathusius, CEO, IFA Rotorion, commented: “Over the recent years, we have expanded our activities worldwide and we were able to maintain our leading position in the field of longitudinal power train components in Europe and North America. Development and manufacturing of driveshafts in Ujazd will not only ensure our presence on the automotive market of Eastern Europe but also access to the rapidly growing market of electrical vehicles. We want our company to get to the Top 100 largest manufacturers in the automotive industry by 2025.”

Marek Foryński, Managing Director of BTS Group, Panattoni Europe, commented: “Assurance for IFA Rotorion as to future expansion options for the project was among the key factors that not only determined the flexible building design but also the choice of location by the investor. Other determining factors included the proximity of a motorway, and availability of qualified workforce. With Panattoni Europe’s experience on similar projects, the preparation phase proceeded very efficiently, and execution of the entire project is going to take 6 months.”