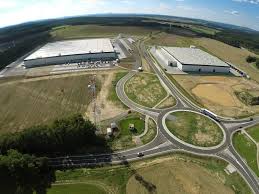 Panattoni Park Stribro, which was recently awarded the Industrial Zone of the Year 2013 in the Czech Republic, has attracted another major investment. A recent groundbreaking ceremony has marked the beginning of the construction of a new plant of the KION Group, which plans to manufacture forklifts. The facility will comprise roughly 24,000 sqm and it will initially employ 200 workers.

Production is due to start in 2016 and the plant will have the capacity to annually produce around 10,000 forklifts. The KION Group plans to invest around €12 million into machinery and equipment. It is the third major investment recently attracted to the park. The enlargement of the zone is the outcome of the joint efforts of Panattoni Europe and the new Czech industrial group Accolade, which will also finance the construction of the new building and lease it to the KION Group afterwards.

Milan Kratina, Chairman of the Board of the Accolade industrial group, explains that the construction of the new building for the KION Group alone will cost about €20 million. The Accolade Group itself will fund this amount, and then hand the building over to the KION Group under a long-term lease.

“The total investment into the industrial park is thus worth around 30 million euros,” said Kratina. “The demand for new investments in the Czech Republic has been increasing over the last few months, which will have a positive effect on the whole Czech economy. The demand is there for industrial parks mainly along our borders with Germany. Talking about the parks we are preparing, the Pilsen Region is not the only region that is attracting investor attention: we have also seen a high rise in demand for the As and Cheb regions.”