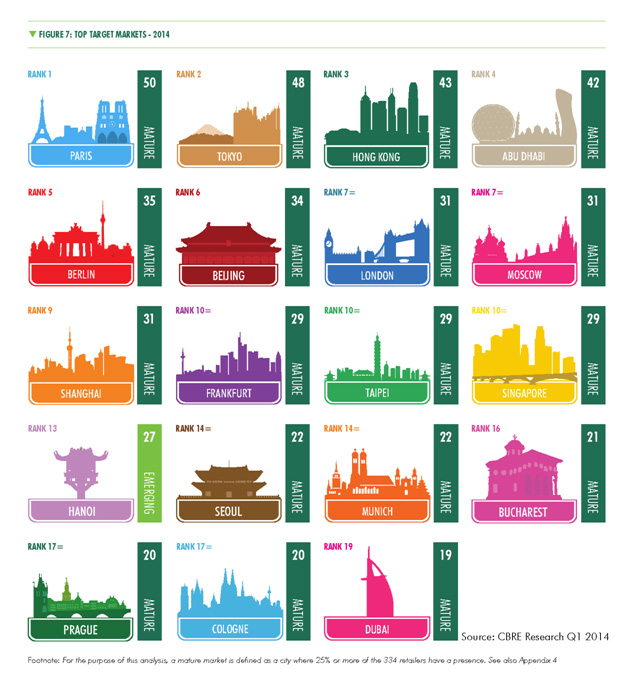 Paris is the world’s hottest global retail market attracting 50 new brands last year, while France is ranked as the leading country for new entrants, according to the latest edition of How Global is the Business of Retail by property advisor CBRE.

The 2014 report which tracks retailer’s movements in 2013, found that over half of retailers (51 percent) are now present in all three major global regions, The Americas, Europe Middle East and Africa (EMEA) and Asia Pacific, a slight increase on the previous year.

Paris has risen in popularity among the cities most attractive to retailers welcoming 50 new entrants over the year, including 10 new Luxury & Business Fashion Brands. Paris benefited from three new shopping centres in 2013, but it was the prime high street locations that attracted most global brands. Competition on these high streets between luxury brands is fierce due to surging demand from tourists, especially from China.

Bucharest is ranked 16th in the global ranking of targeted markets by retailers in 2013, as a number of 21 new entrants were recorded last year. The new entries were done on the back of new shopping center opening, as well as the redevelopment and new leases signed in existing shopping centers. While some new entrants were recorded on high-street / or hotel shopping galleries, the majority of new entrants happened in shopping centers. Overall, Bucharest has 28.2 percent of the city retailer representation, placing the capital on the 49th position worldwide, out of 189 cities.

Tokyo is second as the most attractive city for global retailers, seeing double the number of new entrants during 2013 (48) than it did in 2012, reflecting renewed confidence in the economic prospects of Japan. Hong Kong and Abu Dhabi were the third and fourth ‘hottest’ markets with 43 and 42 new entrants respectively.

London is the home of more international brands than any other city, yet it still attracted 31 new market entrants last year. Other cities in the top ten included Beijing, Moscow, Shanghai, Frankfurt, Taipei and Singapore.

He added: “Global shopping centre development is also at an all-time high and is providing the opportunity for retailers to enter new markets, particularly in Asia, Latin America and Eastern Europe.”