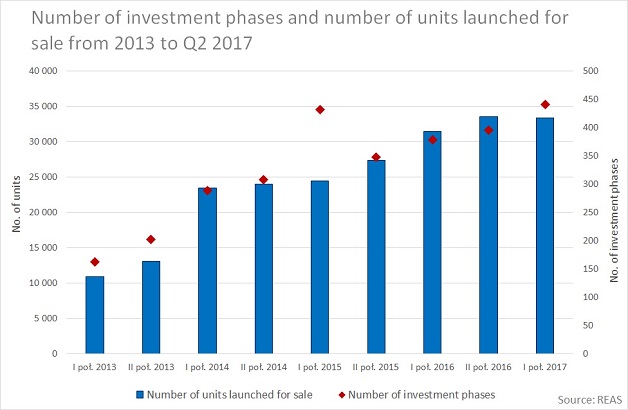 The steady demand observed in the residential sector over the last several quarters has encouraged developers to launch new investments. The first half of 2017 saw 33,400 new units launched for sale in the six largest residential markets in Poland, as well as a record number of 441 new investment phases. Although in the second quarter the role of MdM (Home for the Young) buyers has declined, it did not affect sales, which amounted to 17,600 (an increase of 16.6 percent YoY), reads the latest REAS report “Residential Market in Poland – Q2 2017”.

Optimism dominates on the property market. This is best illustrated by an increase in the number of newly launched investments. In the first half of 2017, developers in the six largest markets in the country launched for sale 33,400 housing units, as well as a record number of 441 new investment phases.

If the pace of the first half is maintained, it is expected that in all of 2017 developers would have begun construction on a record number of over 100,000 housing units, predicts Katarzyna Kuniewicz, a Partner at REAS who heads the Market Research and Analysis Department.

It is worth noting that along with the decreasing amount of funds allocated to the MdM scheme in the subsequent months of 2017, the share of low-cost housing among the units launched for sale has also systematically declined. As a result, the index of price changes in the six markets is slowly but steadily increasing. This trend was confirmed by REAS monitoring results from the second quarter of 2017, which pointed to a clear rise in prices compared to the previous quarter.

This systematic increase in supply and prices was possible thanks to the unprecedented rise in demand. Although in the second quarter of 2017 the number of transactions amounted to “only” 17,600 and was about 6.5 percent lower than in the first quarter of the year, the results for the entire semi-annual period were 24 percent better than in the corresponding period of the previous year. From January to the end of June, in the six markets monitored by REAS (Warsaw, Kraków, Wrocław, Tricity, Poznań, Łódź) 36,400 new units were sold.

There is no indication that demand will decrease in the coming months. Given the negative real interest rates, the purchases of individual investors driving the sales will remain one of the strongest drivers of the market until the end of the year — even if rental yield begins to decline significantly due to high purchase prices. As a result, sales figures for 2017 should be comparable to, and perhaps even better than, in 2016, comments Katarzyna Kuniewicz.

It is worth noting the noticeable revival observed in the past quarter in Łódź. The sales volumes, record high for this city, were met with exceptionally high supply. In the second quarter alone, developers launched over 1,300 units on the market, resulting in a record high offer in the history of the local market: 3,300 units.