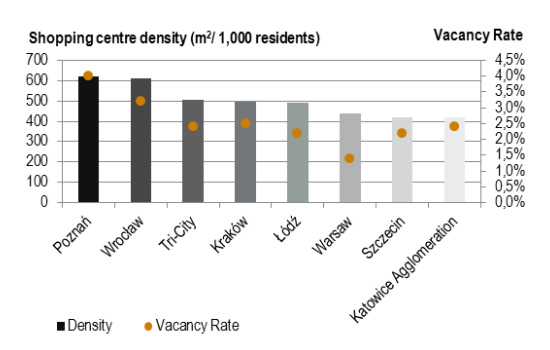 At the end of Q1 2015 modern retail stock in Poland totalled 12.47 million sqm and was accounted for by the following retail formats: 8.89 million sqm, in shopping centres, 3.39 million sqm in retail parks and warehouses, and 0.19 million sqm in outlet centres. Due to the number of openings in Q1, shopping centre stock grew by additional 94,000 sqm Interestingly, only one completely new shopping centre opened in this period, Tarasy Zamkowe in Lublin, which delivered nearly 38,000 sqm of new space. The remaining 56,000 sqm comprised of centres which have undergone extensions. These included: Ogrody in Elbląg (an additional 22,000 sqm), Magnolia Park in Wrocław (17,000 sqm), Atrium Copernicus in Toruń (15,000 sqm) and Rondo in Bydgoszcz (2,000 sqm).

All of the above-mentioned openings have had varying impacts on their respective local retail markets. In Lublin, the opening of Tarasy Zamkowe has redefined the city’s existing retail geography. Wrocław’s Magnolia Park has crossed the 100,000 sqm GLA threshold, Elbląg’s Ogrody centre has significantly increased its retail footprint and gained above-local capture power. Atrium Copernicus is now the largest centre in Toruń. In addition to shopping centres, other retail formats are also being developed: two retail parks, both measuring 6,000 sqm, started operations in Q1: Galeria Głowno and Era Park Wieluń.

The vacancy rate in Poland’s largest cities ranges from low to moderate. The highest proportion of empty units is typically found in the most competitive markets such as Poznań and Wrocław, where vacant units account for 4 percent and 3.2 percent of existing GLA respectively. With a 1.4 percent vacancy, Warsaw continues to be at the opposite end of the spectrum. In terms of shopping centre density, with an average 230 sqm/1,000 residents, Poland remains above the European average of 198 sqm, but still below Western Europe where density averages 260 sqm.

Retailer demand stemming from domestic brands remains relatively buoyant, especially in terms of large market players, such as LPP Group or CCC, who continue to cautiously, yet steadily secure new locations across the country. The most popular international brands although still very selective, continue to expand into increasingly smaller markets. This strategy is often perceived as an alternative to adding new stores to a larger city where brands already have a significant presence. As a result, popular fashion brands, such as H&M, have become even more available to the Polish shopper.

Anna Wysocka, Head of Retail Agency, JLL, said: “The highest demand still involves prime projects in particular markets, while secondary locations and assets can face more challenges. Retail parks are gradually gaining recognition from both domestic and foreign retailers, however, apart from a number of brands such as KiK and Pepco, this pool usually does not include fashion. This may change in the near future though with retail parks being increasingly perceived as better suited to smaller towns, where shopping centres could prove to be unsustainable.”

Increased competition in the retail market also affects the strategies of owners and property managers.

Justyna Williams, Director of Retail Operations, JLL Property Management, explained: “Some centres are being repositioned in an attempt to future-proof assets against more competitive market conditions. Concepts introduced to shopping centres include a wide range of non-retail activities, such as co-working space, public libraries, community centres, art galleries, theatres, e-commerce pick-up points and relaxation zones, to name but a few. Importantly, some of these concepts not only disguise vacancies, but also, to some extent, serve as additional footfall generators.”

In the majority of local markets, rental stability prevails in the case of most assets. An upward pressure on prime rents in Warsaw’s best performing shopping centres is observed. Prime rents have seen an increase over the last couple of months and can be as much as €110/ sqm/month. This is due to the unabated demand for space in a number of the best assets, another effect of which is the necessity to join waiting lists for the opportunity to open up a store. On the other hand, rents in prime assets located in other cities seem to be holding.

Agnieszka Kołat, National Director, Retail Investment CEE, JLL, added: “The total volume of retail investment transactions concluded in Poland in Q1 2015 is estimated at approximately €130 million. Given the number of products currently being marketed and expected to come to market in the coming weeks, we believe that overall 2015 volume will be closer to 2013 level, when ca. €1.39 billion was transacted. We estimate current prime shopping centre yields at ca. 5.5 percent and expect some downward trend”.

Most notable transactions in Q1 2015 were the acquisition of Sarni Stok shopping centre in Bielsko-Biała by Union Investment (price confidential) and the purchase of Solaris in Opole for ca. €52 million by Rockcastle.