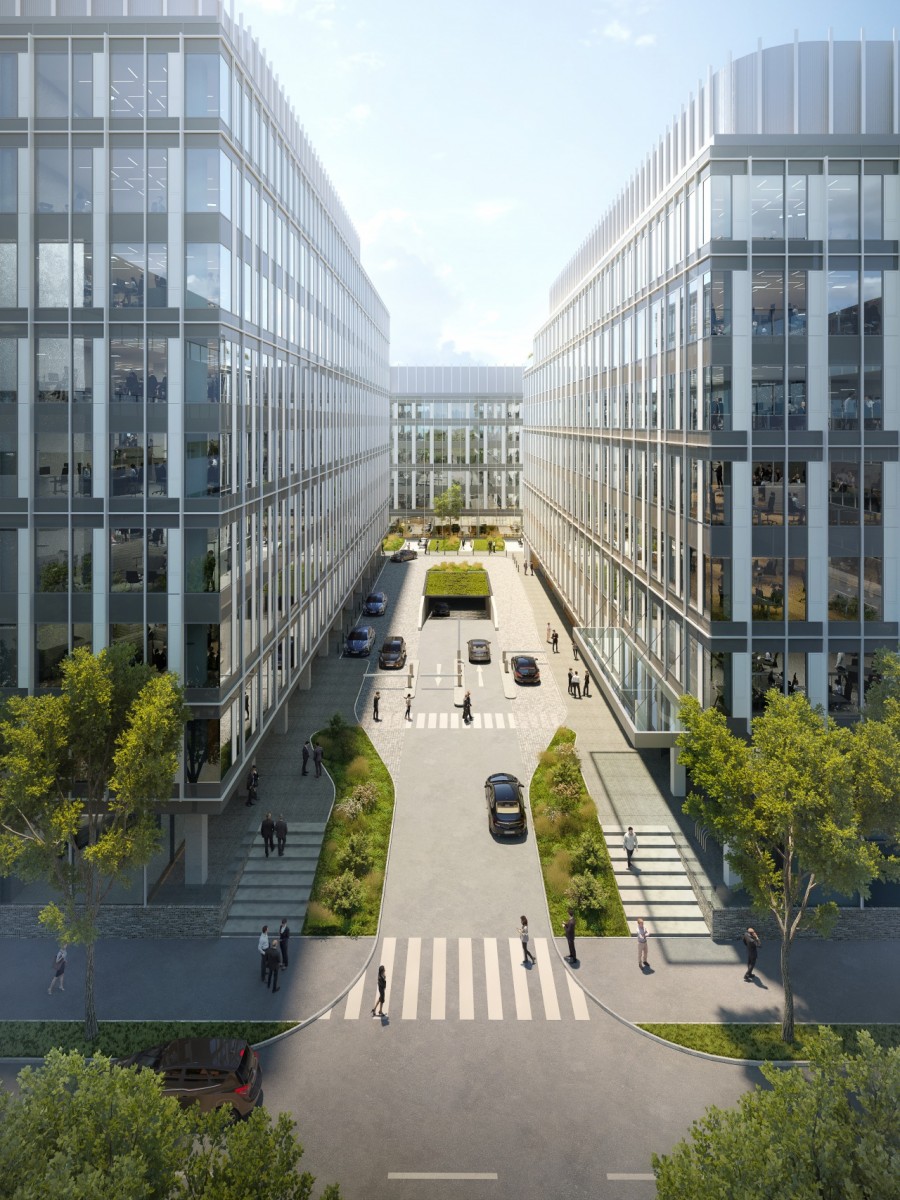 ING Bank, one of the biggest providers of financial services in Romania, represented by the CBRE consultants, will consolidate its headquarters and business operations in a 20,000 sqm office building in Blue Rose Office Park, Portland Trust’s newest project in this rapidly developing sub-market in North Bucharest.

ING will occupy the whole of Building 3, which represents approximately 50 percent of the total leasable area of the business park. The remaining leasable area will be developed in two other buildings, which will comprise 8,000 sqm and, respectively, 14,000 sqm. The Park will be delivered in one phase, with the three buildings placed around a courtyard with restaurants and attractive landscaping. The construction works will take 21 months and the completion is scheduled for spring 2019.

The project will be developed on Expozitiei Blvd, which is a short walk to the “1 Mai” metro station. There is a tram line outside the development and there is excellent road connectivity to the city center as well as to the “Henri Coanda” International Airport.

ING Bank is about to move its headquarter and nearly 2,000 employees in Portland Trust’s Blue Rose office project.

“The ING team has had a constant growth in the number of staff and also, during these past years, has changed its internal organizational architecture, following the agile methodology of working. This means we require a higher flexibility of teams, a more dynamic environment that gives room to creative and efficient workplace. The project also checked one of our most important criteria, of being one of the greenest buildings in Bucharest”, stated Maria Cristina Matei, COO ING Romania.

Robert Neale, Managing Director of Portland Trust, said: “We feel very privileged to have been entrusted to develop ING’s new country headquarters. The design and specification will be to our usual high standards which will meet the exacting standards of the occupier. Building 3 comprises ground floor, with retail banking unit, plus 8 upper floors, being regular and efficient and also including terraces on 8th and 9th levels. This project seems to be a catalyst for the area as various other complimentary office and residential projects are also being planned. ING’s commitment is a great start!”

CBRE Romania advised ING in their decision to move its new headquarter and consolidate operations in the Blue Rose project.

“CBRE dedicated a cross-border multidisciplinary team, supporting and advising ING’s corporate real estate and local business strategically, commercially and technically. With involvement of experts from the Netherlands and Romania, the 24-month-long process has yielded in what will be a long partnership between one of the most prominent banks and one of the most successful developers in Romania. We trust that ING Bank’s new headquarters in Blue Rose confirms Expozitiei area as the next business hub of Bucharest,” Razvan Iorgu, Managing Director, CBRE Romania, said.

Portland Trust obtained the building permit for Blue Rose Office Park and excavation works have started. For this project, Portland appointed Bog’Art, one of the biggest construction companies in Romania, which has previously worked with Portland on Floreasca Park in 2015.

Blue Rose Office Park is the first project to be delivered in the Expozitiei area after more than seven years from the opening of Unicredit Bank HQ and it represents a first step to reshape this area into a new sub-market.

According to a CBRE analysis, total modern stock of Class A offices in the larger area of Piata Presei, which includes Expozitiei Blvd, is about 117,000 sqm, from projects delivered between 2005 and 2012. The total modern office stock in Bucharest is expected to reach 2.8 million sqm until the end of this year and 3.3 million sqm until the end of 2019.