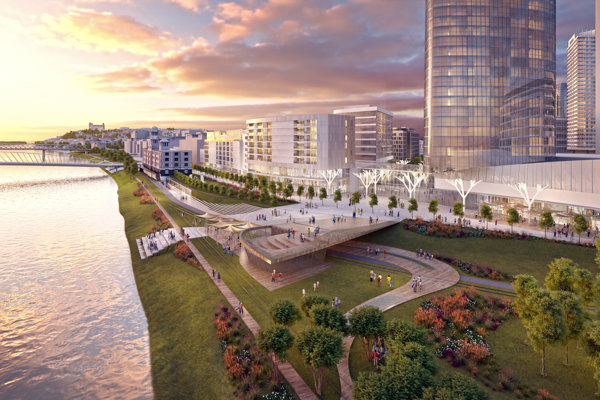 Public spaces in the EUROVEA2 will be designed by Beth Galí, an internationally acclaimed landscape architect – EuropaProperty

The extension of the second stage EUROVEA waterfront project will create a new fully equipped city quarter including generous public spaces. In order to create the urban environment of very high quality in EUROVEA2, the project developer, J&T REAL ESTATE and the project architects, GFI, decided to invite an architect with international reputation and experiences from the largest European metropoles to the team. The landscape architect, urbanist, designer and professor, Beth Galí from the Barcelona BB+GG Architects studio, is the author of several iconic squares, streets, promenades and parks in several metropoles of Europe.

“The importance of a project such as Eurovea requires the creation of not only objects of high quality but also well designed public spaces with clear script and character. Therefore, upon agreement with the project developer, we decided to invite Beth Galí who is an expert with international reputation to cooperate and transfer her experience from European cities to Bratislava as well,” Radoslav Grečmal from the GFI studio explains the cooperation background.

Beth Galí is the author of public space solutions all around Europe. Her most significant projects include the city beach promenade in Barcelona, central spaces in Irish Cork and the waterfront promenade in Hafencity in the German Hamburg. At the same time, Beth Galí operates as a visiting professor at the Harvard University in the USA and at the European universities in Lausanne, Delft and Rotterdam.

“Eurovea is already considered as one of the nicest urban spaces in Bratislava and it provides public spaces of high quality – the waterfront promenade with park and the square, thanks to which people feel really good here. The second stage of the Eurovea project will extend this space and I’m glad it will acquire a completely new quality thanks to the international team,” Pavel Pelikán, J&T Executive Director said.