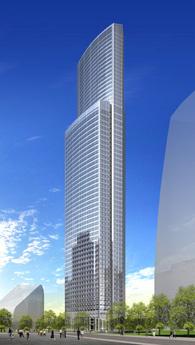 According to Colliers International, 12 new Grade A and B business centres with an office rentable area of 209,000 sqm were completed in Moscow in Q1 2014, bringing the total stock to 14.64 million sqm. Moscow developers plan to build another 1.4 million sqm of office space this year, thus increasing the total stock on the Moscow office market to over 16 million sqm by the start of 2015.

As of Q1 2014, Colliers International analysed that 12 new business centres appeared on the Moscow office market with an office rentable area of 209,000 sqm, which is comparable to completions during this period in recent years. Grade A premises accounted for 62 percent of the new office space. The largest business centres to open include Eurasia Tower, Mebe One Khimki Plaza, Solutions Business Park (Phase III) and Morozov Business Centre (Phase III). 90 percent of these centres are new buildings and 10 percent are reconstructed buildings. At the end of the first quarter the total stock of quality office space in Moscow reached 14.64 million sqm.

Total take-up in Q1 2014 amounted to 290,000 sqm, which is around 40 percent less than the take-up volume during this period last year. However, in Q1 2013 the office market saw the fruition of deferred demand and higher than usual take-up for the period. This year’s Q1 take-up was down 13 percent from the average Q1 take-up volume. The most active sectors during the period were IT & Telecom and Professional Services, which together accounted for nearly half of the volume of absorbed premises (48 percent). Additionally, manufacturing and energy/industrial companies, whose share of the market take-up amounted to 17 percent and 11 percent, respectively, leased the offices.

According to Colliers International, the vacancy rate increased slightly over the first quarter and reached 10 percent. The volume of vacant Grade A premises grew by 3 percent due to the large volume of completions coming on the market and reached 20 percent at the end of Q1 2014. For Grade B the vacancy rate remained practically unchanged at 7.6 percent.

During the first three months of the year rental rates for Grade A premises in Moscow’s Central Business District remained at 2013 levels while outside this district a drop in rates was observed. The average rental rate for Grade A space in Moscow declined by 4 percent to $760/m2/year. Grade B+ offices saw rates decline by 2 percent to $490/m2/year while in the Grade B- segment rates slide 6 percent to $390/m2/year on average.

Another 1.4 million sqm are planned for completion by the end of 2014, with half of this space qualifying as Grade A. However, Colliers forecasts that the actual volume of new build will be closer to 900,000 sqm.

Eleonora Bogdanova, Director of the Office Agency Department, Colliers International Russia, commented: “Demand for office premises in Moscow remained stable in the first quarter of 2014. Foreign companies with representative offices in Moscow are not yet planning to curtail their business here or leave the market. This can be seen in general take-up numbers: about 60 percent of the office market foreign companies completed transactions. Nonetheless, the increasing volume of completions coming on the market could lead to further growth in vacancy rates and, consequently, a correction in asking rental rates.”