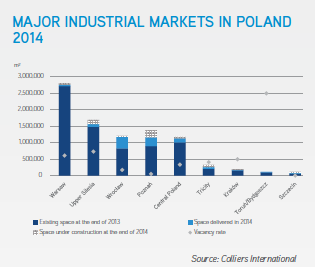 The latest research from Colliers International describes the situation of the industrial market in nine major regions in Poland. The report also includes information on education, the labour force and salaries in particular industries.

New supply of modern industrial space in 2014 reached 1.1 million sqm which is the highest figure since 2009. Growth in 2015 is forecast to remain at a level comparable to that observed in 2014.

“Due to its rapid development, the importance of the Polish industrial market in the Central and Eastern Europe region increases each year. At the end of 2014, the total supply of modern industrial space in Poland exceeded 8.8 million sqm,” said the report “Logistics vs production. Industrial market and labour force” published by Colliers International.

“The publication focuses on two aspects: real estate and human resources. Apart from describing the situation in the industrial market in each of regions, we have also included information on education, the labour force and salaries in particular industries. In addition, the report contains comments from developers, tenants, HR specialists and experts who have shared their experiences and opinions on how to invest in Poland,” said Dominika Jędrak, director of research and consultancy services at Colliers International.

At present, the Polish industrial market is undergoing rapid development. In 2011 – 2013, around 500,000 sqm was delivered annually, while new supply in 2014 reached 1.1 million sqm of modern industrial space, which is the highest figure since 2009. Growth in 2015 is forecast to remain at a level comparable to that observed in 2014.

Effective rental rates in Polish industrial markets range between 2.00 and 2.90 €/sqm (e.g. Central Poland) to 3.40 – 5.00 €/sqm (Warsaw zone I). The costs of leasing a production facility are usually higher than for standard industrial space.
In addition to rent, a tenant is required to pay a service charge (for security, maintenance, property tax etc.). These costs are comparable in regional markets and range from 3.80 PLN/sqm to 4.40 PLN/sqm.

As regards the labour costs compared to the other EU member states, Poland is competitive market. According to recent figures from Eurostat, average labour cost levels in Poland (wage, training costs, insurance contributions and taxes) are approximately four times lower than the EU average.

The report “Logistics vs production. Industrial market and labour force” was prepared by Colliers International and Advisory Group TEST Human Resources under the honorary patronage of Polish Foreign Investment Agency.