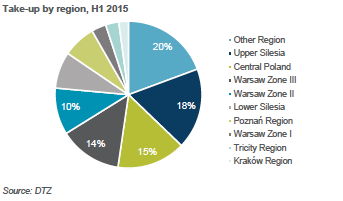 According to DTZ’s newest Property Times Warehouse report, demand has remained stable during the first half of 2015. This state of affairs has been reinforced partially by the further development of the e-commerce sector and partially by the improving economic situation within EU member states. The latter has increased export levels and domestic production levels, further adding to the demand for warehouse space.

In terms of signed lease agreements, H1 2015 has been recorded as the best H1 in history, with 1.3 million sqm of modern warehouse space being let, a result 7 percent higher than the in analogous period in 2014. Logistics operators were the most active, signing over half of newly-signed lease agreements. Small area (5,000-15,000 sqm) leases were more popular compared to last year. However, these smaller spaces are more challenging for tenants in terms of customising them to their needs, which stems, among others, from the high levels of engagement of light production companies in the market.

“The highest demand in H1 2015 was observed in Upper Silesia (18 percent), followed by Central Poland (15 percent), Warsaw’s zones III (14 percent) and II (10 percent). Tenants continue to display high levels of interest in less developed warehouse markets such as Szczecin and Rzeszów, where the markets are in their infancy. Smaller regional markets comprised 20 percent (253,000 sqm) of the leased volume, which is also a first,” said Kamila Wykrota, Head of Consulting & Research, DTZ.

Developers, responding to stable, high levels of demand from tenants, have delivered 491,000 sqm of modern warehouse space in H1 2015; the best result since 2010, bringing the total volume of modern warehouse stock in Poland to 9.2 million sqm. Most modern space (183,000 sqm) was delivered in Poznań and Warsaw (90,000 sqm), including all zones in the latter. Highest take-up levels (20 percent) were noted in less developed regional markets, with Lublin and Szczecin at the fore, with take-up of 113,000 sqm in H1 2015, another first.

At the beginning of the year, 637,000 sqm of modern warehouse space was under construction, of which 2/3 has already been let. The speculative sector of the market now comprises between 25-30 percent of the total, meaning that developers are less risk-averse. Upper Silesia (132,000 sqm) and Lower Silesia (111,000 sqm) are where most of the pipeline stock will be delivered in H2 2015. Regional markets, such as those around Szczecin, Lublin, and Rzeszów, comprise 140,000 sqm of modern stock, and are significantly more popular among developers than in previous years.
“Thanks to stable, high demand for modern warehouse space, as well as new BTS and pre-let schemes, vacancy rates remain at the record low level of 5,6 percent; we do not expect this to change significantly due to the aforementioned high level of demand. Vacancy rates are higher—reaching 10 percent—in Warsaw’s zones I & II,” added Kamila Wykrota.