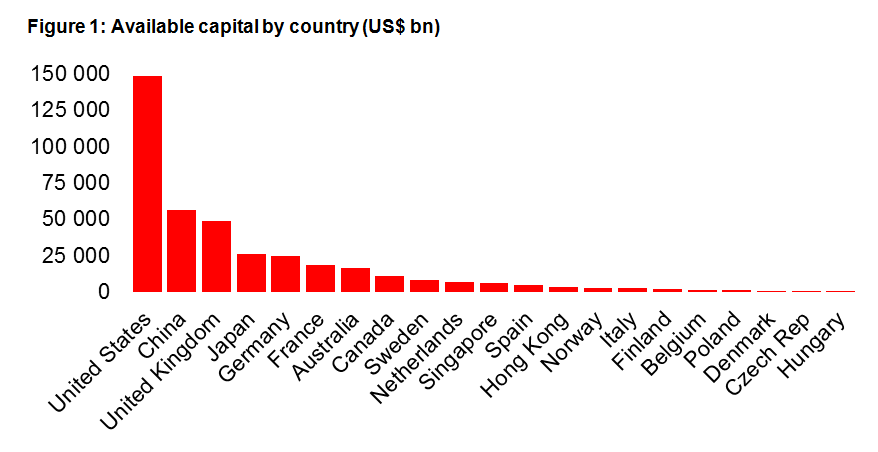 New capital targeting commercial real estate globally grew to reach a new record of US$443 billion in 2015, according to a report from Cushman & Wakefield.

The 12th edition of the Great Wall of Money report – launched at MIPIM at Cushman & Wakefield’s stand – tracks the amount of newly-raised capital targeting real estate at a global level. The report shows that the flow of capital is unrestricted as investors seek opportunities in all markets across the world.

However, despite investment activity approaching record levels in many markets, the pace of growth in capital raising is slowing, according to the report. Indeed, 2015’s 3 percent increase is much weaker than the 21 percent growth recorded in 2014 and reflects how active investors have been in putting their capital to work in an increasingly buoyant market.

Growth in available capital was recorded across the three regions with Asia Pacific leading the charge with an 8 percent increase to US$131 billion, bolstered by the closing of a number of funds during the course of 2015. Despite this increase, however, the region attracts the least capital. Both EMEA and the Americas saw capital expand by less than 2 percent. Across EMEA, there is US$143 billion of new capital, with the Americas still attracting the greatest amount at US$169 billion.

In a step change from last year, actual raised capital has started to decline – albeit by less than 1 percent from US$408 billion to US$407 billion. This indicates that funds that have raised are focused more on deploying their capital. This is especially true for EMEA, where raised capital fell 4 percent over the year to US$131 billion. In contrast, Asia Pacific saw a modest rise of 3 percent, and the Americas was up less than 1 percent.

“With available capital at record levels, effective deployment becomes a critical concern for investors. This will benefit the large and liquid markets of the US, China, UK, Japan and Germany. We also expect the strong momentum of cross border flows to continue as investors seek to diversify across markets.

“As opinion on the future of the markets becomes increasingly divided, we anticipate there will be a further transformation in the way in which capital is allocated. Investors will focus on de-risking decisions and will favour preferred managers with strong track records. In addition, given the significant capital allocated to real estate, investors will evaluate joint venture and platform deals as a route to deploy capital more easily in the market.”

The report states that more than half (58 percent) of investors are concentrated on a single geography, whereas multi-country funds represent 42 percent of capital. Across the regions, variations in strategies are reported and there are more single-country funds active in the Americas (48 percent) and Asia Pacific (30 percent) compared to EMEA (22 percent).

Report author Nigel Almond, Cushman & Wakefield’s Director of Capital Markets Research, said: “The weight of cross border flows continues to transform real estate markets across the globe. Most notably, more than 40% of capital targeting both Asia Pacific and EMEA is from outside their respective regions, with North American-sourced capital dominating.

“Although Asian and EMEA funds are deploying a higher proportion of raised capital in their own regions, we see a significant share flowing across regional borders. Global and Asian opportunities remain key targets for European capital, while Asian money is set to diversify across markets globally, following the trend of many Asian institutions in recent years.

“We estimate that the Americas is set to achieve the greatest amount of domestic investment, with 71 percent of available capital raised domestically. A sizeable, near quarter of raised capital is set to come from outside the region, predominantly from European investors.”