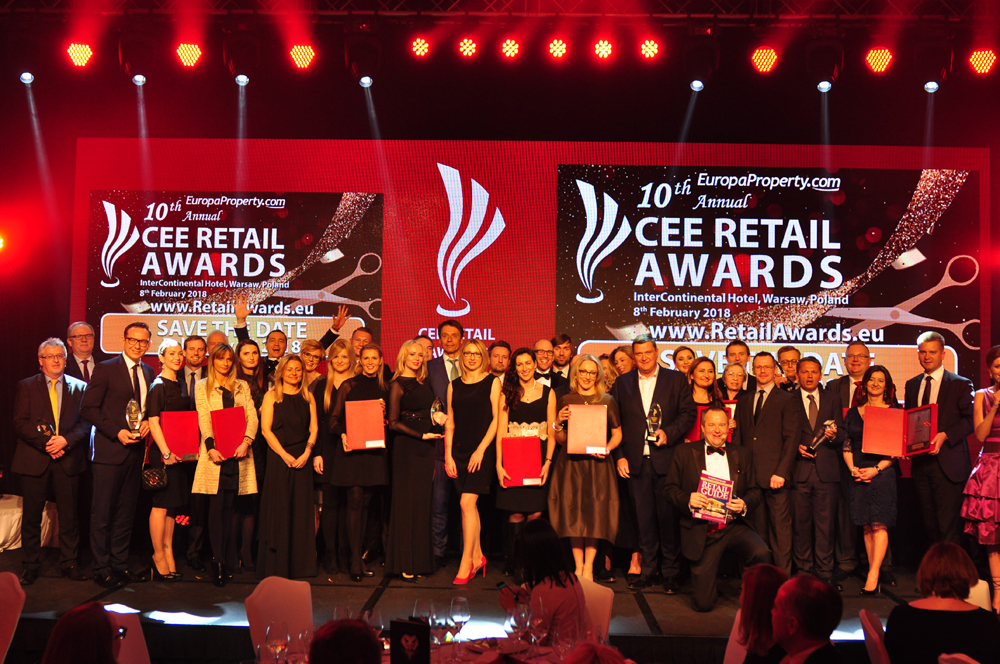 In a significant boost to the retail real estate industry, the ninth edition of the annual EuropaProperty CEE Retail Awards, welcomed a record number of attendees, including over 150 retailers actively operating in the region.

Accentuating the strength and interest in the region’s retail sector, 14 key retailers were awarded on the night. Overall Retailer and Fashion Retailer of the Year went to New Look, which was recognised for their continued expansion and confidence in the CEE region throughout 2016. The Newcomer of the Year award was received by the American fashion retailer Forever 21. Other major winners for the retailer specific awards included: Green Coffee Nero, Vapiano, Helios, Media Markt, Carrefour, SMYK, Douglas, Intimissimi, Yes, Kazar, 4F and H&M.

South African investor Rockcastle was recognised by the jurors for its investment success in the region. Through 2016 the company has continued its high profile investment strategy of seeking investment opportunities in existing assets and development projects, for example, Rockcastle was recognised as Retail Investor for its prolific acquisition strategy throughout the region, and it’s record breaking purchase of Bonarka City Center in Krakow for €361 million. The company won two awards, including Overall Company of the Year as well as Investor of the Year.

Continuing their long running success at the CEE Retail Awards Apsys once again picked up the Developer of the Year. Further emphasising their success in 2016 the jurors also voted Apsys’ regional powerhouse development and lifestyle centre in Poznan, Posnania, Shopping Centre of the Year in the large category.

New kid on the block Echo Polska Properties picked up the Property Management Firm of the Year award, highlighting the growing importance of good asset management, and the extensive nature of the firm’s retail portfolio under management.

GTC’s Jacek Wachowicz was named this year’s Industry Professional. The Jury recognised his strong leadership and leasing skills on the developer’s new retail projects in Warsaw and existing portfolio in Poland.

2016 was a big year for retail development in Poland and the project award winners reflected the changing dynamics of the country’s retail development market. Many of this year’s nominees formed extensions, refurbishments, and new retail park concepts.

Other major project accolades were given to Atrium European Real Estate, for their extension to Atrium Promenada in Warsaw, which one Retail Extension of the Year. Acteeum Group received high praise and recognition for Galeria Wolomin, which collected the Shopping Centre of the Year award in the medium category.

Global consultants CBRE picked up the Agency of the Year award. Additional company awards were presented to Dentons, one of the world’s biggest law firms, which received the regional Law Firm of the Year award, with KPRF Law Firm collecting the award for Poland. Tax and Financial Adviser of the Year once again went to TPA and Professional Service Provider of the Year went to RegioPlan Consulting.

Gleeds again followed up last year’s success by collecting the Project Management Firm of the Year award. Chapman Taylor once again picked up Architectural Firm of the Year. ING Bank Slaski was voted Bank of the Year. Shopping Center Director of the Year was awarded to Blue City’s Yoram Reshef.

The awards, held at the five-star Intercontinental Hotel Warsaw, brought together some 450 top real estate professionals from the major retail market sectors in the CEE region and were selected by an international academy of jurors, comprised of senior industry professionals, who presided and deliberated over the eventual winners, representing some of the best commercial retail real estate companies, retailers, projects and people operating in the CEE region for 2016. The 70-strong independent jury panel of the CEE Retail Real Estate Awards casted their votes for one winner in each category.