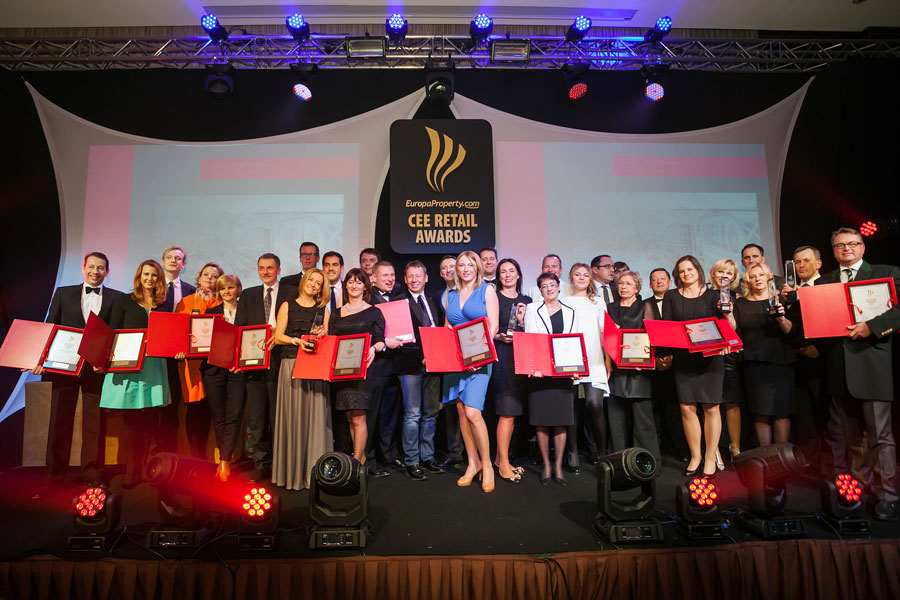 The awards, held at the five-star Intercontinental Hotel Warsaw, brought together some 450 top real estate professionals from the major retail market sectors in the CEE region and were selected by an international academy of jurors, comprised of senior industry professionals, who presided and deliberated over the eventual winners, representing some of the best commercial retail real estate companies, retailers, projects and people operating in the CEE region for 2013. The 41-strong independent jury panel of the CEE Retail Real Estate Awards casted their votes for one winner in each category.

Property developer Mayland Real Estate shone the brightest on the evening picking up three awards. The company received high praise and recognition for their Riviera Shopping Centre, currently Poland’s largest retail development. The centre won the Extended/Refurbished Project of the Year as well as the coveted Overall Project of the Year award. Further emphasising their success in 2013 the jurors also voted Mayland the Developer of the Year.

Maciej Kielbicki, Managing Director of Mayland Poland, said: “I would like to thank the jury for recognizing our considerable achievements for 2013. It was a challenging year for us, but finally we delivered.”

2013 was a big year for retail development and the project award winners reflected the changing dynamics of the region’s retail development markets. Many of this year’s nominees formed extensions, refurbishments, mixed-use and retail park projects. This year the winning projects were from Poland, Hungary and new for 2013 Turkey, one of the most active and attractive countries for retail real estate in the region.

The recently opened, TriGranit-developed and managed, Poznan City Center won one of the most prominent retail project prizes, Retail Project of the Year in the large category. Poznan City Center, which opened its gates on 25th October 2013, has proven to be a huge success – since its opening it has welcomed more than 5 million visitors.

Árpád Török, CEO of TriGranit Development Corporation, said: “The CEE Retail Real Estate Awards are one of the most prestigious awards of the real estate development sector in Europe, where international market professionals appraise and evaluate a number of high profile projects. It is therefore a great honour for us that Poznan City Center’s huge success has been acknowledged and we have once again been recognised as one of the top industry leaders.”

ECE Projektmanagement  collected two project awards. One for their Arkad 2 shopping center in Hungary, highlighting a possible upturn in the country’s fortunes and Maltepe Park in Turkey. The project’s were awarded in the Turkey Shopping Center of the Year and Shopping Centre of the Year in the medium category.

Other major accolades were given to CBRE Global Investors, which was recognised by the jurors for its investment success in the region. Through 2013 the company has continued its high profile investment strategy of seeking investment opportunities in existing assets and development projects, for example the current extension of the Ogrody Shopping Centre in Elbląg, Poland. The company won two awards, including Overall Company of the Year as well as Investor of the Year.

A popular winner for this year’s Professional of the Year award was Dieter Knittel, Director Europe at Deutsche pfandbriefbank. On receiving the award, he commented, “I’m proud to be at our company as well doing business in Poland.”

Global consultants Jones Lang LaSalle once again picked up the Agency of the Year award. Beatrice Mouton, Regional Director, Head of Retail CEE at Jones Lang LaSalle commented: “We share this award with all our clients and thank them for their loyalty, trust and belief in our retail capability. Our success is their success.”

Additional company awards were presented to Dentons, one of the world’s biggest law firms, which received the Law Firm of the Year award. Tax and Financial Adviser of the Year and Professional Service Provider of the Year went to TPA Horwath.

Bank Pekao, part of the wider UniCredit Bank Group, was voted Bank of the Year. A surprised Marek Koziarek, Managing Director at Bank Pekao, enthused, “I’m surprised by this result but extremely proud. I hope we can be as good this year as we were over the last.”

Accentuating the strength and interest in the region’s retail sector, 10 key retailers were awarded on the night. Overall Retailer of the Year went to Deichmann, which was recognised for their continued expansion and confidence in the CEE region throughout 2013 and the Newcomer of the Year award was received by SinSay. Other major winners for the retailer specific awards included: Costa by Coffeeheaven, Pure Jatomi Fitness, Saturn, Alma, Rossman, CCC, Kazar and Reserved.

The retail awards gala and forum was organized to acknowledge and highlight the growing international significance of the commercial retail real estate market and related industries in the CEE region from both a development and investment perspective. Awards were presented to companies in the region for outstanding accomplishments for the year 2013.

EuropaProperty would like to thank all the participants at the event and congratulate the winners. The awards for 2014, to be held in February 2015, are set to be even more competitive in these increasingly dynamic markets and challenging times.

The EuropaProperty CEE Retail Real Estate Awards for 2013 was sponsored and supported by: