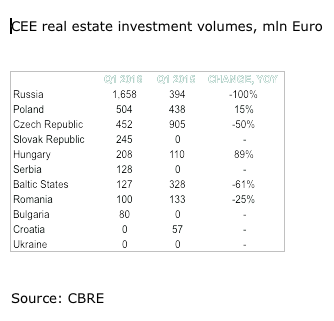 Investment into Central and Eastern European (CEE) countries (excluding Russia) for Q1 2016 registered a slight decrease (6 percent) compared to same period of last year, reaching €1.84 billion. Expectations are that for the entire year, investment volumes will reach and exceed the record volumes of 2015, with all CEE countries expected to perform strongly, according to a recent summary of investment transactions in CEE Q1 2016 by CBRE.

Compared to full 2015, when US investors accounted for 30 percent of investment into the region, at the start of the year those most active in the first quarter have been German investors, followed by local/ regional investors (Polish, Czech or Slovak investors). South African funds have restated their interest for the region with record breaking transactions in Serbia and Montenegro, with more investments expected in other CEE countries over the course of the year.

Throughout the region prime yields have mostly remained stable compared to Q4 2015, with two major exceptions: Czech Republic and Poland, where compression of 25 bps was recorded for office sector which is now priced at 5.50 percent; a record low level for this current economic cycle. This comes on the back of high levels of interest from investors for core assets, of which there is a shortage of available product.

Russia registered a stellar q-o-q increase, with Q1 volumes reaching almost 60 percent of full 2015 volumes. The main driver for investors interested in Russia now is the potential of asset value recovery on the back of the market correction. Despite the uncertainty in the market, investors see the benefits of investing at market bottom and the advantage over other investment opportunities in the form of value retention in the long term. Taking into account the volume of deals in Q1 2016 and current deals under negotiations, we upgraded our forecasts to €4 billion from previous €2.5 billion.

Andreas Ridder, Chairman CEE, commented: “2016 is expected to be a record year for the entire CEE region, with Hungary, Slovakia and Romania catching up and becoming stars of the region. No doubt, interest for core-CEE markets, Czech Republic and Poland, will remain very strong and new records might be established in 2016. Already investment activity picked up in Serbia, the Baltics and Bulgaria, a trend set to continue throughout the year. In some markets or sectors, investors will face scarcity of attractive products, available for transaction.”

Olesya Dzuba, Director, Strategic Analysis and Planning Department CBRE in Russia, commented: “The Q1 2016 investment volumes in Russia were the result of pending demand on realization starts. The closure of two large deals has made a significant contribution to the total investment volume. The volume of deals estimated to be closed this year is about $2 billion (€1.75 billion) that allows us to expect the investment volume of about $4.5 billion (€3.9 billion). It will be supported by the stabilization and appreciation of the rouble on the back of increasing oil prices, expectations on key rate cuts on the back of inflation easing, Asian and Middle Eastern investor activity, as well as the market bottoming out, which offers good investment opportunities.”