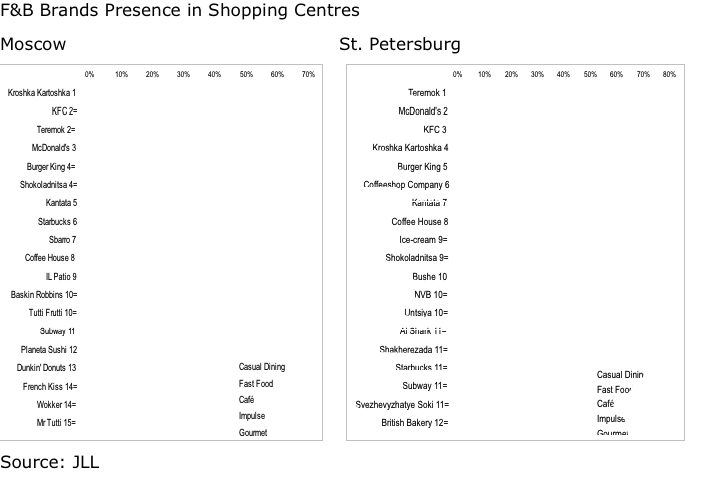 According to JLL, the level of globalization in the food and beverage segment is lower than in the fashion market. The majority of F&B operators are presented only in their local markets. However, some catering brands expand globally. The world’s largest operators include McDonalds, KFC, Pizza Hut, and Subway. These brands operate in more than 100 countries. Some smaller and relatively young brands are trying to expand globally, such as Vapiano, Wagamama, Chipotle and Eataly. Upscale restaurants from celebrity chefs including Gordon Ramsay and Jamie Oliver also appear in different countries. Among Russian brands, only a few have opened cafés and restaurants in other countries. Among those are bakery Stolle, crapery Teremok, restaurants Novikov Restaurant & Bar, Jean-Jacques and Mari Vanna.

The majority of F&B brands in shopping centres of Moscow and St. Petersburg are Russian (accounting for 76 percent and 81 percent of F&B facilities respectively). The top brand in Moscow is Kroshka Kartoshka (which serves baked potatoes with various toppings) and in St. Petersburg Teremok. In both cities, Fast Food and Casual Dining brands have the highest density. However, Fast Food consists mainly of chains, while Casual Dining is represented by individual facilities.

“The Moscow market enjoys an active expansion of innovative Fast Food concepts,” commented Ekaterina Andreeva, Investments and Retail Markets Analyst, JLL, Russia & CIS. “For example, a free flow format Plovberry operates in three Moscow malls, a Georgian fast food Vay Me! services the Metropolis food court, the unique concept Khinkali LAB has opened in Evropeysky. Alongside Caucasian and Central Asian cuisines, other examples of street food appear in Moscow malls. Traditional Greek and Israeli pitas and falafels are served in Kalimera and Saj & Falafel; Asian Pho soups are served in Pho Bo, another street food concept. These brands are unique and currently represented by just a few units. Yet, some of them have found a place on food courts of prime Moscow shopping centres. They have a high potential for further expansion due to the increasing consumer demand on such F&B formats and landlords’ interest in expansion of the F&B offer.”

Moscow outperforms St. Petersburg by the number of restaurants in shopping centres. The best represented Russian Casual Dining brands are IL Patio (22 percent) and Planeta Sushi (16 percent), while TGI Friday’s (8 percent) is the most active foreign chain. The best represented Casual Dining brand in St. Petersburg is a Russian chain Eurasia (12.5 percent). Restaurant chains are less active the city than in Moscow, while there are many unique restaurants, such as Barashki, Bolshaya Kukhnya, Moskva, etc.

Shokoladnitsa (52 percent in Moscow and 20 percent in St. Petersburg) and Coffee House (about 23 percent in each capital) represent the largest Café chains in the shopping centres. The most active foreign brands are Starbucks and Coffeeshop Company. There are 33 Starbucks cafés (31 percent of the shopping centre market) in Moscow malls and 8 cafes (14 percent) in St. Petersburg. The Coffeeshop Company is also popular in St. Petersburg, with twice the number of cafes of its American competitor – 16, or about one-third of the market. In Moscow, the brand covers only 5 percent of the market. It is worth mentioning that the local café chain Bushe has a relatively wide presence in St. Petersburg malls (9 units or 16 percent).

Top Impulse brands in Moscow are American Baskin Robbins and Mr.Tutti (each cover 20 percent), while in St. Petersburg these are Russian ice-cream (20 percent) and fresh juices (15 percent) kiosks.

Russian tea and coffee vendors are on top among Gourmet brands. An absolute leader is Kantata, which covers 36 percent of the Moscow malls and 25 percent of those in St. Petersburg.

There is a new trend on the F&B market, with fast casual and fine dining formats branching out of the Casual Dining category. Fast Casual is a combination of casual dining restaurants and fast food formats, with features like special guest areas and a wide variety of meals. A notable foreign Fast Casual representative is Shake Shack, with two units in Moscow malls. Russian brands follow the trend with Marketplace and ObedBufet expanding in shopping centres. Fine Dining (high-end restaurants) includes the world famous brand Nobu, as well as Nu-Art-Café and Fusion in Crocus City Mall, El Gauchito and Oblaka in Vremena Goda. Such brands usually appear in Speciality shopping centres, which focus on premium and luxury brands.

“We see that the Russian consumer is maturing. Visiting a shopping centre now includes not only shopping but also gaining new experience and new impressions. This also impacts re-development and re-concept of the dining zones in shopping centres: landlords have started to focus on new F&B formats, including unique ones, those who have never thought about opening in a mall; they also focus on gourmetization, healthy food, local food and exclusive offers,” concluded Tatyana Malyanova, Head of Shopping Centres Agency, JLL, Russia & CIS. “A well-organized dining area with various concepts helps shopping centres to attract more loyal customers, increase their dwell time and overall revenues.”