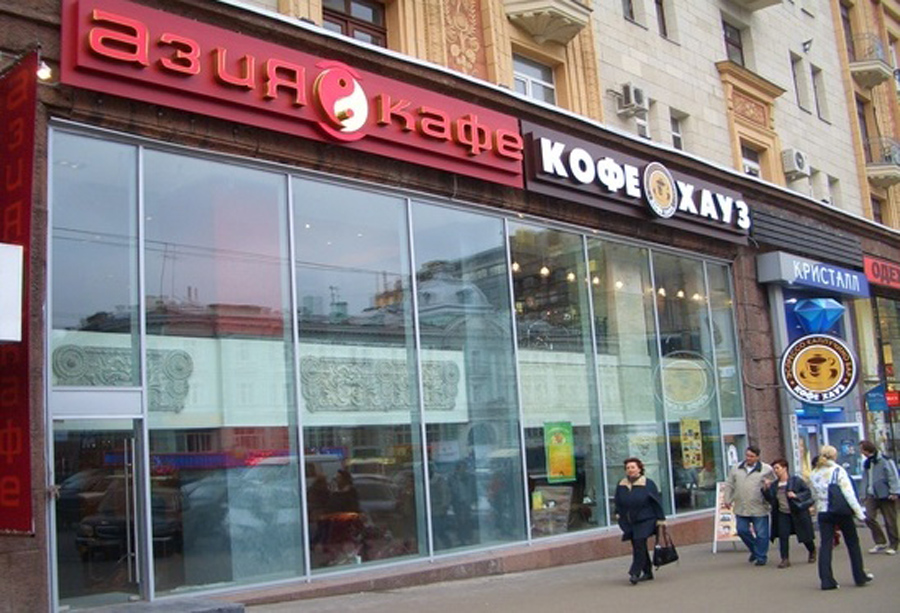 More than 40 food service businesses of different types opened in Q1 2016 in Moscow’s Central District, compared to only 23 conceptual cafes and restaurants opened in the same district in Q1 2015. At the same time, two-thirds of new openings were individual concepts rather than branches of chains, according to a report by the international consulting company Colliers International.

Food service chains and restaurant companies remain the leaders in the number of new openings and make up 41 percent of the total rentable area in the main retail corridors in Moscow’s Central District. Clothing and footwear stores take second place (11 percent), followed by banks and financial services (9 percent) and groceries (5 percent). The average area of new openings is around 100 sqm for cafes and 300 sqm for restaurants.

In terms of types of food service, beer restaurants and craft beer bars (Boroda, Right Hops, Lions Head Pub) and meat restaurants (Max’s Beef for Money, Bigrib) remain popular. The meat restaurant I Like Grill, a new project by Vladimir Perelman (I Like Wine, I Like bar, Beer & Brut), will open soon. The wine and gastropub restaurant sector also continues to develop rapidly. The latest openings include the gastropub One More Beer & Wine, the Shop & Bar wine shop and the Brix wine bar (its third branch in Moscow). In addition, in May 2016, the St. Petersburg-based chain of wine bars Monopoly (developed by the Ladoga alcoholic beverage company) is entering the Moscow market – its first restaurant will open at the corner of Tverskaya Street and Nikitsky Lane.

Over the past year, the average rotation of tenants in the central corridors amounted to approximately 17-18 percent. In recent years, there are increasing examples of changes in tenant types, even in multi-purpose spaces. For example, a grocery outlet may open in place of a dental office or a bank, and fashion-operators are replacing food service businesses. So a RotFront store replaced a Calzedonia store on Nikolskaya Street, and BB & Burgers replaced a Thomas Munz branch on Pyatnitskaya Street.

Overall, the street retail sector is still attractive for new brand openings in Moscow. Q1 2016 was characterised by the dynamism of international players who opened several flagship stores in the street-retail format – the Ladureé confectionery on Malaya Bronnaya Street, the British brand Charlotte Olympia shoes on Dmitrovsky Lane and the showroom of the French brand Aigle on Olympiisky Prospekt.

A significant development in early 2016 was the dismantling of retail pavilions near the metro stations Arbat, Kropotkinskaya, Mayakovskaya, Ulitsa 1905 Goda, Taganskaya, Chistye Prudy, Pushkinskaya (the Pyramida shopping centre) and several other locations. The tenants of the dismantled premises formed additional demand for first-floor retail space in the vicinity of the dismantled spaces. Most of the demand is from impulse-shopping retailers – newsstands, small grocery stores, mobile telephony outlets, florists and souvenir shops. Key factors in the selection of premises for retail chains are location and traffic, and some chains may move into built-in first-floor spaces or shopping malls. However, many conventional street-retail tenants have been priced out of the market due to higher rental rates.

The street retail rental market still predominantly operates in roubles, and rouble rental rates did not change in the central streets in Q1 2016 compared with late 2015. However, the general trend of falling rental rates in 2015 allowed some operators to enlarge the area of their stores. For example, the operator Lush is opening its biggest store in its Russian chain at Tverskaya Street 4.

Ekaterina Podlesnykh, head of street retail at Colliers International Russia, said: “According to our forecasts, there will be an additional increase in the sector of pedestrian-access food service and grocery stores. The current supply of vacant space and business conditions remain favourable factors for the market entry of new, interesting projects, including chains. In addition, the continuing trend in the optimisation of the domestic banking system will further free up premises occupied by banks.”