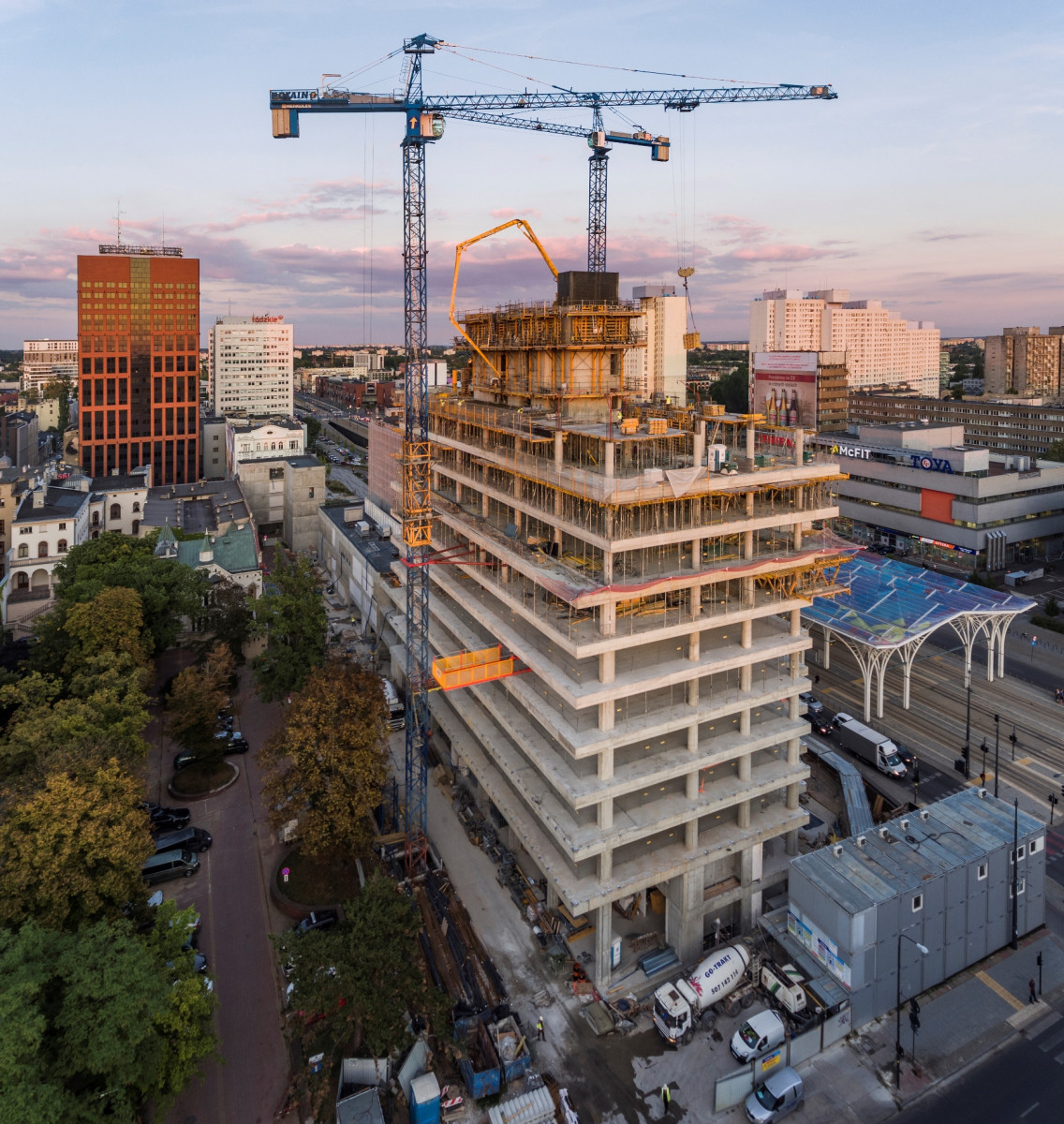 The office tower, which is one of three buildings in the Hi Piotrkowska 155 complex in the heart of Łódź is already over 40 m tall. The tenth floor of what will eventually be a 20-story building has now been completed. Construction work on the two other buildings, which will house a small office block and a hotel on Piotrkowska street, was completed in the first half of the year. The completion of the construction of the complex is scheduled for March 2020.

“We’ve reached the halfway stage of what will be the tallest building in the complex and also the tallest office building in Łódź. We’ve completed the construction of the ceiling for the tower’s tenth floor and work is now underway on the eleventh story. We are installing elevators and preparing to start work on the facade. At the same time as the work on the tower, we’re constructing the facade of the hotel. We’re installing the windows, the ventilation, the ceilings and the floors. The work is on schedule. We’re planning to complete the construction work on the tower at the end of the fall,” explains Jacek Pilarczyk, Project Manager at Master Management Group.

Hi Piotrkowska 155 is a mixed-use office and service complex under construction in the very centre of Łódź. The project includes two office buildings as well as a Hampton by Hilton hotel. A 20-story office tower with a height of 82 m is currently at an advanced stage of construction and will be the tallest office building in Łódź. Construction work on the other office building was completed in the first half of this year. The building has five floors and stands on Piotrkowska street. Together the two buildings offer 21,000 sqm of class A+ office space as well as 5,000 sqm of retail and service space. The seven-story Hampton by Hilton hotel will have a restaurant and 149 guest rooms.

Being in the very centre of Łódź guarantees those who use the complex convenient access to public transport and to the extensive network of cycle paths. What helps make this location exceptional is that it stands directly on Piotrkowska street and next to the Piotrkowska Centrum transport hub, which is used by around 50,000 people every day.

Both local entrepreneurs and large international chains are attracted by the opportunity of developing their businesses in the Hi Piotrkowska complex. The tenants of the centre already include serviced office space provider New Work, PKO BP, Starbucks, HEBE, Just GYM, Żabka, Namieszane Grill & Bar, Apteka Europejska, Telfan GSM, bakery and bistro Z Pieca Rodem and also drugstore Apteka Europejska and Delikatesy Fabryczne. Only two units remain unlet: a corner space of 270 sqm on the first floor of the hotel with direct access to Piotrkowska street and Mickiewicz alley, and a 120 sqm space in one of the office buildings with direct access to Piotrkowska Centrum transport hub. Both spaces are retail and service units. The leasing agents for the complex are Knight Frank and CBRE.

With its wide mix of uses, Hi Piotrkowska 155 will add to the offices retail and services on offer in the centre of Łódź. The complex could also reinvigorate tourism in the area, since one of the tenants is the Hampton by Hilton hotel. Piotrkowska street is also the longest retail high street in Europe as well as one of the main attractions for visitors to the city. Because a large number of historic buildings face onto the street, the project’s facade was created in consultation with the city’s historic preservation office.

The complex was designed to meet the requirements of BREEAM certification and uses the latest technology to minimize its impact on the environment. The systems used improve the working conditions of those in the building and allow the tenants to significantly lower the cost of their operations. Each building and service unit will have its own individual entrance.