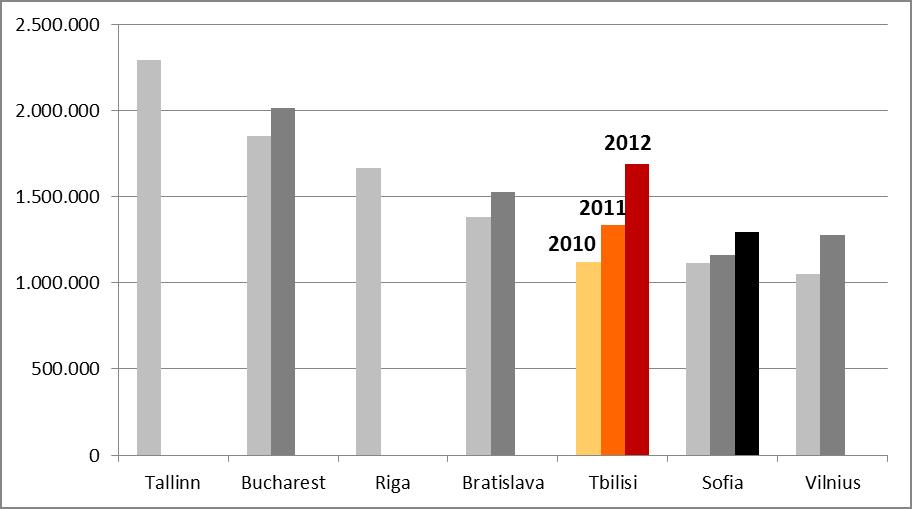 For many international investors, Georgia remains an unknown and small market. Inflow of FDI, particularly from Europe, has been minimal. It is inevitable however, that European investors will start to take note of the fact that market size and related investment opportunities are growing rapidly. Tourism is one of the fastest growing sectors in Georgia, with demand outpacing supply by a wide margin since 2009/2010. As a result, the size of the hotel market in Tbilisi is now on par with Central & Eastern European capital cities such as Bratislava and Riga, and has surpassed Vilnius and Sofia.

In 2009, the total number of overnight stays in Tbilisi accommodation facilities amounted to less than 700,000, a level similar to Ljubljana, Slovenia (with a population size roughly a quarter of Tbilisi). Since then, the size of the hotel market has more than doubled, with an estimated number of overnight stays of almost 1.7 million in 2012. This pace of growth, not seen anywhere else in Central & Eastern Europe, has put the size of the Tbilisi hotel market on par with Bratislava and Riga and closing in to the level of Bucharest and Tallinn, markets with an annual demand of around 2 million.

Supply has been markedly slow to catch up, with the last significant hotel added to the market in 2010 (Holiday Inn), and as a consequence occupancy rates have been skyrocketing in Tbilisi. The aggregate average occupancy rate in Tbilisi is estimated at 79 percent in 2013, whilst in the CEE benchmark cities it ranges between 30 and 50 percent – a massive difference. With a rapidly increasing number of hotels in various stages of development this is set to change, but the supply backlog is so substantial that occupancy rates will remain far above the CEE average for years to come, even if demand would stabilize.

Currently, the most significant hotel projects include Rixos, Rooms Hotel Tbilisi, Hilton Garden Inn and Park Inn by Radisson. The lion share of new hotels will be positioned in the 4-star segment and it is here where competition will intensify most, with an anticipated decrease of room rates as a result. The many small family hotels in Tbilisi (which now account for more than 70 percent of supply) will also have to prepare for more difficult times, as 3-star chains with strong value propositions will likely move in soon as well.

For quite some time to come however, the Tbilisi hotel market will continue to offer ample opportunities for a wide range of investors. There is ample scope to increase supply and particularly to boost its diversity. Commonplace hotel concepts, such as 5-star boutique hotels, are not present in today’s market and value for money is notoriously hard to find.