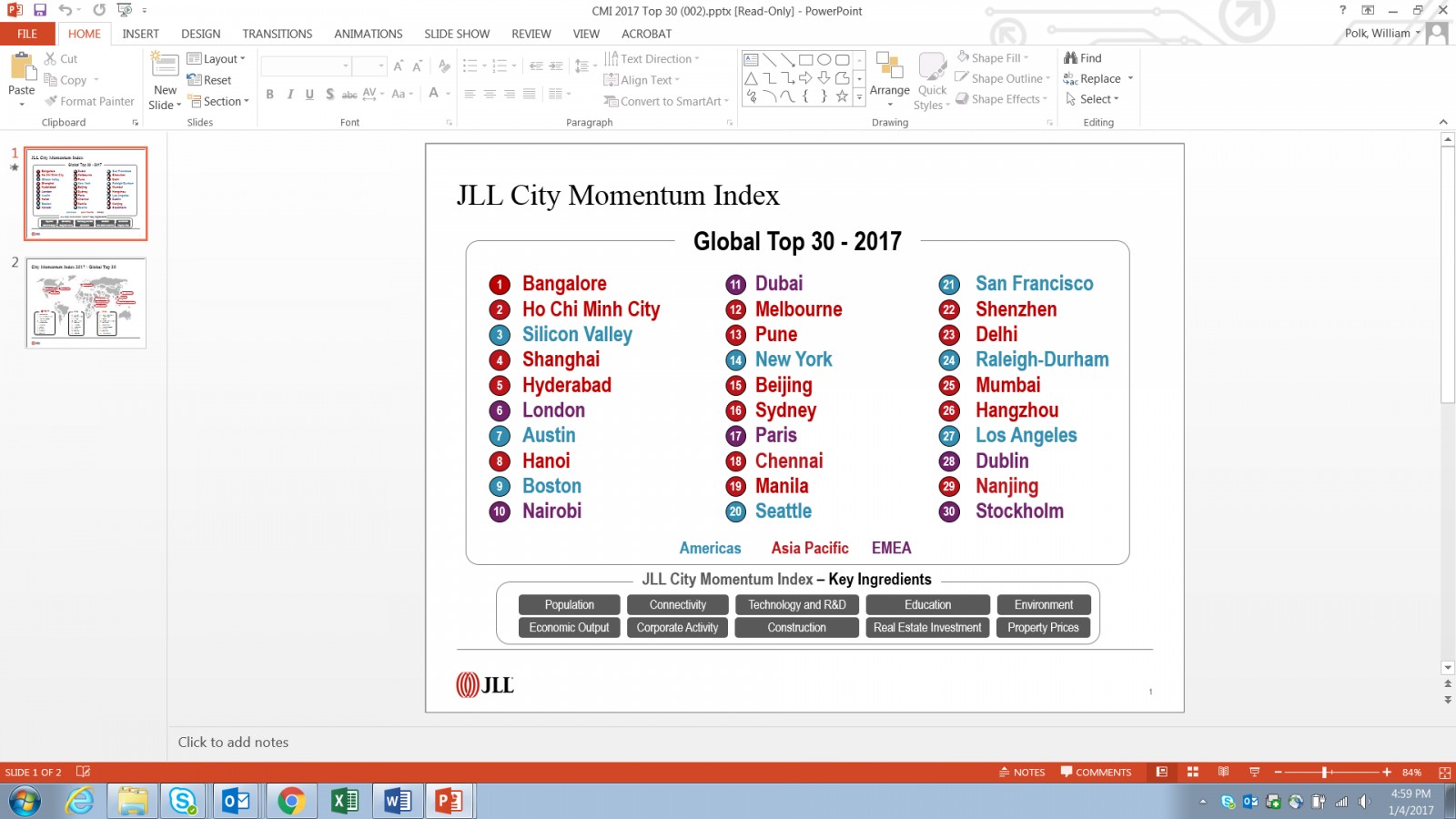 The cities in JLL’s fourth annual City Momentum Index (CMI) of the world’s most dynamic cities share the ability to embrace technological change, absorb rapid population growth and strengthen global connectivity. Cities in India, China and Vietnam, along with several in the U.S., head the list of the world’s fastest changing cities.

“With more than half the world’s population currently living in cities, a proportion that is expected to grow substantially over the next few decades, the success of our cities takes on great importance,” noted Jeremy Kelly, JLL Director in Global Research. “The CMI highlights that, despite various political upheavals and ongoing economic uncertainties, many cities continue to show impressive dynamism. Keys to their success are the agility and openness that enable them to adapt quickly to each new wave of global change.”

Technology continues to be a major driver of momentum in the world’s 30 fastest-changing cities. These cities provide fertile environments for innovation and successfully integrate into global networks, often outperforming their national economies.

Highlights of the CMI Top 30 include:

• Asia Pacific cities comprise half the top 30 fastest-changing cities. India has taken over from China as home to some of the world’s most dynamic cities. Six Indian cities feature in the CMI Global Top 30, with the country’s primary technology hub, Bangalore (1), moving into the top spot for the first time.

• ‘Established World Cities’1 integrate technology into their existing economies and leverage their established strengths to draw top talent. These cities include London (6), New York (14), Paris (17) and Los Angeles (27). While London has fallen from the top spot, (a position it held for the past two years), it has remained remarkably resilient following the Brexit vote, retaining a top 10 ranking.

• High-tech excellence helped push ‘New World Cities’2 further up the Top 30. These cities, which include Silicon Valley (3), Austin (7), Boston (9), Seattle (20), San Francisco (21) and Raleigh-Durham (24) in the U.S.; Melbourne (12) and Sydney (16) in Australia; and Dublin (28) and Stockholm (30) in Europe, are supported by robust infrastructure, a favourable quality of life and transparent business practices, which boost momentum and real estate market activity.

• A shift into high-value activities helped drive momentum in ‘Agile High-Value Emerging Cities.’3 Standouts include mega cities such as Shanghai (4) and Beijing (15) and technology hubs such as India’s Bangalore and Hyderabad (5) and China’s Shenzhen (22).

• Dynamic labor markets help fuel some ‘Emerging Mega cities,’4 such as Chennai (18), Manila (19), Delhi (23) and Mumbai (25). However, this group faces significant infrastructure and quality of life issues, with high levels of inequality, congestion and pollution hindered by weak city governance.