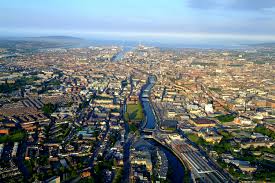 The comeback kids of the European office markets – EuropaProperty

Dublin proved to be the standout success story in the European office market for the second half of 2014, with rental growth rising by 14.3 percent in six months to €480 per sqm per annum (an increase of over 21 percent in the last year).

Colliers International’s Office Snapshot for H2 2014 also shows increases in rents across Barcelona and Amsterdam for the period of 2.9 percent and 2 percent in Madrid. Despite Italy’s continuing economic woes, Milan and Rome also reported rental growth in H2 for the first time since 2011 and 2012 respectively.

Bruno Berretta, Senior Research Analyst, Colliers International, said, “In Madrid and Dublin rents are undeniably rising from a very low base, and in virtually all the markets in this category increases are localised and confined essentially to CBDs and the best office districts. However, the uplifts paint a positive picture for things to come in 2015, and we expect continued improvement for these markets, subject to the economic recovery remaining on track, with greater downside risks for Italy.”

Paul Finucane, Director of Business Space, Colliers International, Ireland, said, “The economy in Dublin is slowly back on track, giving rise to improved market sentiment, coupled with a lack of prime space in the CBD driving rental growth. The challenge for the next couple of years is to cater for the anticipated supply with the limited existing stock in the city. There has been no let up with FDI and a feature of 2014 was the rapid expansion of the established IT juggernauts such as LinkedIn, Twitter, Facebook and Amazon. There are a number of new developments and major refurbishments under way in the city. The Docklands Strategic Development Zone will fast track the planning process but it is critical that construction commences as soon as possible to cater for medium to long term demand.”

Elsewhere in Europe, conditions continued to reflect the uneven rhythm of economic growth across the region, creating four market categories:

‘Under pressure’ markets: comprising parts of southern Europe and the Eastern fringe of the continent (Rents fell substantially in Moscow and St Petersburg, Russia and Kiev, Ukraine throughout 2014). Uncertainty and economic weakness have resulted in increasing vacancies, likely carry over to 2015.

‘CBD-led’ recovering markets: including key office locations in Spain, Ireland and Netherlands, which are benefitting from the economic upturn and improved sentiment.

‘Stable’ markets: The German Big Six, Paris, parts of Scandinavia and CEE. In Germany, prime rents increased throughout 2014 and are now at their cyclical peak. Despite the more worrying state of the French economy, prime CBD office rents in Paris were unchanged in H2, but downside pressure remains in place across the rest of the market. In most cases, including Paris and Germany, prime rents are forecast to remain stable through at least the first part of 2015.

‘Ahead of the curve’ markets: Dominated by the UK, there are signs of rental growth becoming increasingly broad-based and filtering through to the regions. Prime rents increased in London West End (+2.1 percent), London City (+8.3 percent), Manchester (+1.6 percent), Birmingham (+1.8 percent) and Bristol (+1.8 percent) during the second half of 2014. Forecasts point to CBD rents increasing further in a majority of centres in the next 12 months as business confidence continues to improve.

Berretta continued, “In H2, the weight of capital sharpened its blade on European real estate, pushing prime office yields lower across a diverse number of locations. With the leasing market generally still lacking vigour, this means pricing has continued to move faster than fundamentals, especially in recovering markets where the rental recovery has been so far primarily driven by a shortage of good quality space rather than a convincing upturn in demand.”

“The outlook for 2015 hinges on the solidity of the Eurozone and whether the Euro is effectively irreversible as rumours of a “Grexit” resonate again. Even the sounder European economies cannot withstand a spell of prolonged weakness in key economic partners and the power of politics can drive sudden change in sentiment, although a slow growth scenario remains the most likely scenario,” Berretta concluded.