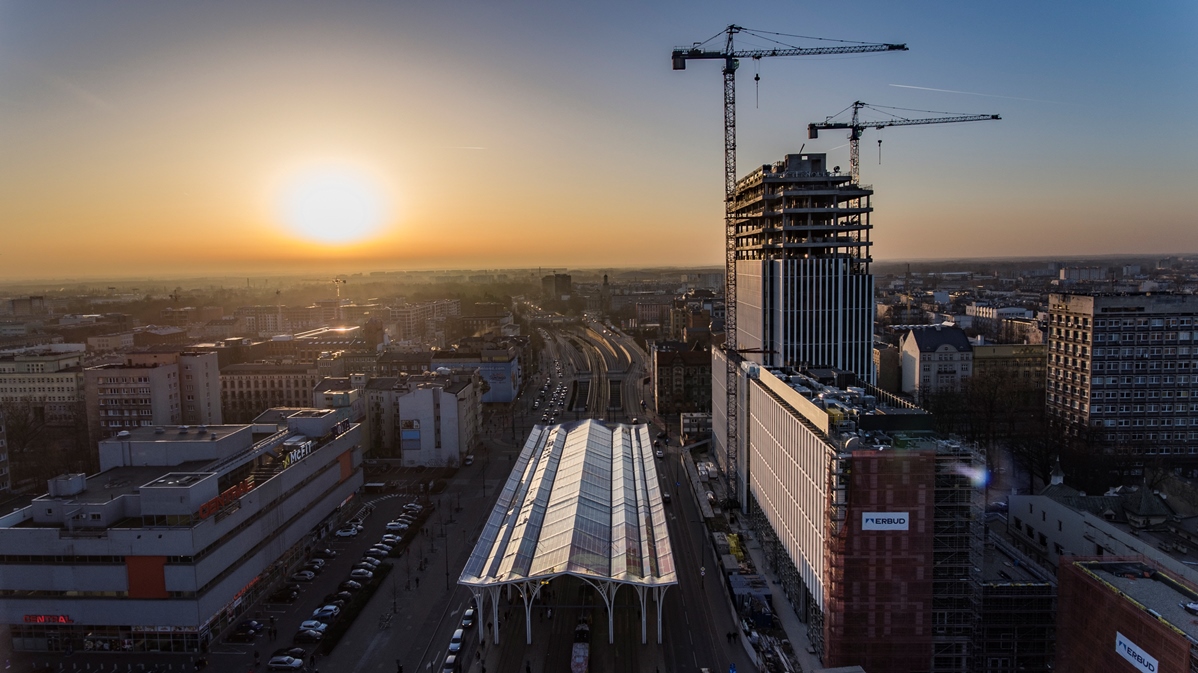 The office tower, one of the three buildings of the Hi Piotrkowska complex under development in the centre of Łódź, has reached its target height of 82 metres and has thus become the tallest office building in the city. The other two buildings of the complex – the hotel and the office building on ul. Piotrkowska – have both reached their lock-up stages. The completion of the construction work is scheduled for June 2020.

Hi Piotrkowska is a mixed-use office and service complex being developed in the very centre of Łódź. The project includes two office buildings as well as a Hampton by Hilton hotel. A 20-story office tower with a height of 82m has reached the shell-and-core stage. Construction work on the structure of the other five-story office building was completed in the first half of this year and the building is now in its lock-up stage. Together the two buildings offer 21,000 sqm of class A+ office space as well as 5,000 sqm of retail and service space. The seven-story Hampton by Hilton high standard hotel will have a restaurant and 149 guest rooms.

“We are proud to announce that further milestones have been reached in the development of our flagship investment, Hi Piotrkowska. The construction work has been completed on the 82m office tower, which now has the status of the tallest office building in Łódź. In addition, the hotel along with the other office building on ul. Piotrkowska have reached their lock-up stages,” says Justyna Drużyńska, the director of office operations at Master Management Group.

Being in the very centre of Łódź guarantees those who use the complex convenient access to public transport and to the extensive network of cycle paths. What helps make this location exceptional is that it stands directly on Piotrkowska street and next to the Piotrkowska Centrum transport hub, which is used by around 50,000 people every day.

“We are currently continuing the finishing work on the façade and inside the office tower. We are also happy about the noticeable progress on the small office building, which now has its intended external appearance. All the windows, aluminium-glass façades and roof coverings have now been fitted. The first tenants will be moving in in the second quarter of this year,” adds Justyna Drużyńska.

Hi Piotrkowska will greatly enhance the office, commercial and service offer in Łódź city centre. The complex also has the potential to liven up the tourism in the city – with a Hampton by Hilton hotel being one of its tenants. And since the complex includes historic tenement buildings along the frontage of Piotrkowska Street, its design has had to meet the approval of the city’s monument conservator.

The complex has been designed in such a way to make use of technology that minimises its environmental impact. The approach that has been implemented guarantees a highly comfortable working environment for the buildings’ users while also enabling tenants to reduce their operating costs. Obtaining a ‘Very Good’ rating under the multi-criteria BREEAM certification system for green buildings represents independent confirmation that the above requirements have been met and of our solid approach towards sustainability.