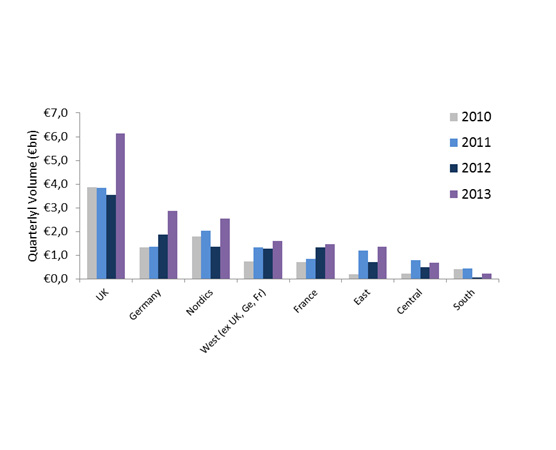 The next industrial revolution is underway – EuropaProperty

Within a growing and vibrant market, the industrial sector still stands out for the pace of activity that has emerged. The sector significantly outperformed the wider market last year, with volumes up by 57.4 percent to a six-year high compared to the total market gain of 27.3 percent, with retail up 19 percent and offices 22 percent. As a result, the sector now has a 10 percent market share, its highest since 2004.

According to Nick Jones, head of EMEA Industrial Investment at Cushman & Wakefield: “With nothing short of a new industrial revolution now underway as multichannel retailing and changes to the supply chain impact, what we are seeing is not just a cyclical recovery but a major structural change and investors increasingly see industrial property as offering real growth potential for the future.”

Demand is strong from a broad range of investors, domestic and international, with North American players among the key movers last year but Asian and European buyers also strongly evident. The emergence of a number of platform buyers, with strong ambitions and fire-power to match, has been a material driver of the market as they target large portfolios. At the same time however, this has re-introduced a premium in portfolio pricing, which has made it harder for many smaller funds to get into the market.

David Hutchings, Head of EMEA Investment Strategy at Cushman & Wakefield said: “The growth of the market for occupiers, developers and investors is set to continue and is part of global trend driven by the growth of on and off line trading. As a result, the market is likely to continue to expand at a faster rate than others sectors, with volumes forecast to rise 18 percent this year to hit €20 billion for the first time.”

Increased demand will bring more pressure on prime yields in core markets but higher yielding second tier markets will also see more interest as investors look for new areas of buying opportunity. However, according to Hutchings: “Increased liquidity will bring secondary yields down in many areas but investors should focus more on the quality of the location, asset and local workforce than on the gap between prime and secondary yields.”

Occupational demand for modern facilities is increasing as businesses start to invest once more and logistics spending and outsourcing increase. There is also demand for new types of distribution space such as cross-dock facilities and according to Jones: “New sub-sectors of industrial space are emerging linked to e-tailing as retailers look to their supply chain to cut costs to be more competitive but also to use it aggressively to win market share through improved service.”

While annual growth was strong, quarter on quarter growth was slower than in the market overall – with a 33 percent rise between Q3 and Q4 contrasting with a 58 percent market rise- and the ability of the sector to deliver higher volumes is still held back by a lack of modern stock in many areas.

Jones added: “Finding stock is not easy but more speculative development is likely in key logistics hubs over the coming year. With stronger developers now active in a broader range of markets, a more standardised high quality product is emerging which makes the market more accessible. Greater focus is likely to be on brown field than green field sites and technical improvements from sprinkler systems to inventory management will continue to influence building design. Ongoing demand for sustainable space is also likely, with a high level BREEAM or LEED certification now demanded by many buyers, notably German funds.”

Most sectors are heavily focused on just three markets: the UK, France and Germany – but for the industrial sector it is a big four, with Sweden also a major market. This group held a 70.4 percent share of the sector in 2013. This however is down from 71.8 percent in 2012 as markets such as Russia, the Netherlands and Norway gained ground. Some of the strongest increases meanwhile were in a number of mid-sized markets, such as Italy, Czech Republic and Denmark.

Soren Rodian Olsen, Head of Polish Industrial Investments at Cushman & Wakefield, added: “Poland is regarded by large investors as a key priority in Continental Europe next to the 3 core markets, and 2013 saw another record in industrial transactions. We predict this trend to continue in 2014, although availability of attractive portfolios and stand-alone assets with long-term leases is expected to become more scarce.”

By region, the fastest growth last year was in Southern Europe – at 266 percent – but this was from a very low base and in a market where industrial investment is less significant– accounting for just 2.5 percent of total trading in 2013. There is nonetheless a lot of money looking to enter these markets, particularly Spain, with a shortage of institutional stock holding the market back.

Eastern Markets also saw a strong bounce – 89 percent – and are home to the largest relative industrial market with the sector having a 15.6 percent investment market share as developing infrastructure and modernising retailing throw up more activity to excite demand. Central Europe also has a high market share – 14.6 percent but growth in the region was somewhat lower last year (36 percent).

Commenting on these patterns, Hutchings said: “Events in Ukraine obviously cloud the outlook but when conditions allow, both Central and Eastern Europe are likely to see demand escalate as the availability and price of skilled and unskilled labour move up the agenda for expanding businesses and investors again follow occupiers and increase their activity in the region. In all areas a lot of current demand is more about cities than countries or regions however and it is urban logistics that should perform best. There is nonetheless still a strong role for large regional distribution centres serving these urban hotspots as well as cross border markets and transport hubs.”

Warehousing, Logistics and Industrial Tenants are shifting their focus to BTS facilities

December 8, 2022
Warehousing, Logistics and Industrial Construction of VGP Park Zvolen starts
After concluding an agreement with logistics company Packeta Slovakia on the future lease of 2,500 sqm of warehouse space, VGP is starting with the construction of the first warehouse...