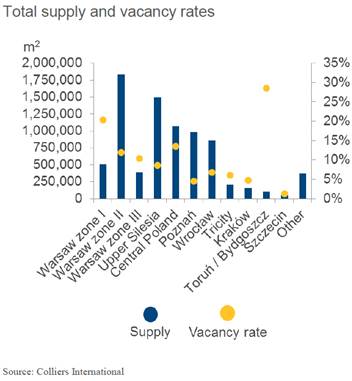 The industrial sector in Poland has witnessed a large amount of supply in the first quarter of 2014. From January to March, 270,000 sqm was delivered to the market, which was five times the new supply noted in Q4 2013 (55,000 sqm). The biggest increase in supply of space was observed in the Poznań market (70,000 sqm) – according to a report by Colliers International.

Due to such a significant supply increase in Q1 2014, total warehouse space in Poland exceeded 8 million sqm and at the end of March reached 8.03 million sqm.

Compared with the last quarter, the vacancy rate decreased by about 0.6 percentage points and at the end of March 2014 totalled 10.2 percent.

Transaction volume in past three months amounted to 483,000 sqm and was smaller than in the record Q4 2013 (908,000 sqm). New deals constituted 69 percent of demand, while renegotiations 31 percent. Additionally, ca. 50,000 sqm were leased within short-term agreements, which are not included in the transaction volume statistics.

Rents for warehouse space during the last 12 months have remained rather stable. A slight upward trend in rental rates could be observed only in regions where vacancy rates are rather low and demand is high.

Investors are still cautious about speculative purchases of investment land. Only those plots which, are well prepared (accurate planning records, regulated legal status, preliminary agreements with utilities providers and precise regulations on road transport) have a chance to be effectively purchased by an investor.

Currently, a large number of investors are at the preliminary stage of choosing investment land (industrial land with an average size of 10 ha), the purchase of which is expected to be completed in Q2 and Q3 2014. Investors are mostly interested in such regions as: Warsaw, Łódź, Wrocław, Poznań and Upper Silesia.