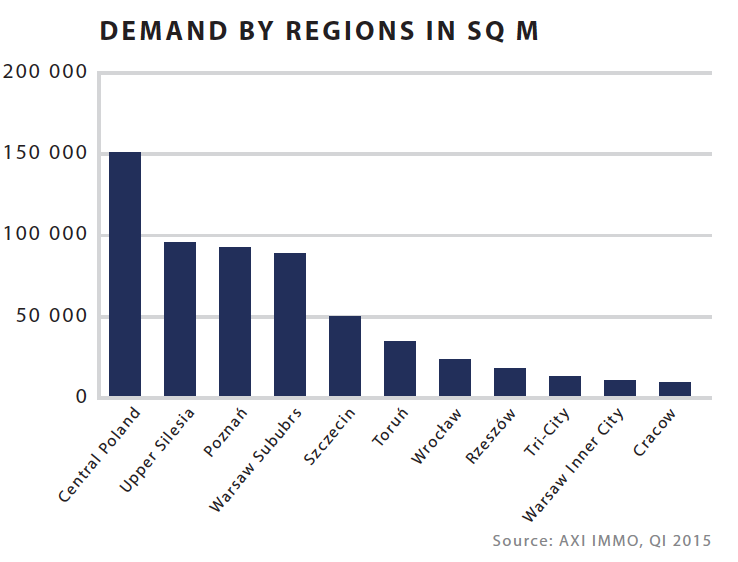 Increases in production, exports and domestic consumption are reflected positively in figures for the warehouse and production market in Poland. According to AXI IMMO, development activity is showing no signs of weakening, with 600,000 sqm currently under construction. In the first months of the year the vacancy rate fell below 6 percent, and total demand exceeded 625,000 sqm.

Gross demand amounted to 625,000 sqm, of which more than 390,000 sqm constituted new leases. This figure is 25 percent higher compared with QI 2014 and is the best opening of the year in terms of demand in the history of the market for modern warehouse space in Poland. In Q1 2015, logistics operators predominated in the structure of tenants, though increased clients activity related to the DIY and automotive sectors were visible.

Central Poland enjoyed the greatest interest among tenants, where 152,000 sqm was rented. This was followed by Warsaw (120,000 sqm) and Upper Silesia (95,000 sqm). The highest level of new demand was recorded in Poznan, where 74,000 sqm was rented.

“The first quarter, in terms of demand, belonged to mature markets and smaller regions, such as Rzeszow and Szczecin. It is worth noting that a significant part of the demand, around 15 percent, consisted of expansions. This reflects the good market conditions and the development of tenants,” commented Renata Osiecka, Managing Partner at AXI IMMO.

Since the beginning of the year, 278,000 sqm of modern warehouse space has been completed, which increased the volume of total supply to 9.1 million m2. After the first quarter, the largest amount of space under construction, including speculative space, remains in the Wroclaw region (101,000 sqm). Apart from the main markets, increased activity among developers in smaller markets can be observed. 100,000 sqm is currently under construction in Szczecin, Lublin and Rzeszów.

“One of the driving forces of development activity are the low vacancy rates in most regions. An increasing number of tenants from different industries need space immediately. A developer that has available space has a significant competitive advantage. This was an important factor in leases in Piotrków Trybunalski and the Warsaw area in the last quarter,” added Renata Osiecka.

In the coming months, we can expect a slight increase in the vacancy rate in Wroclaw, where over 40 percent is speculative space.

“A low vacancy rate continues in the Central Poland region, where production companies make up a significant proportion in the structure of tenants, while a lack of typical speculative projects is noticeable. On the other hand, in Piotrków Trybunalski and Stryków, where most contracts are short-term in nature and the tenant structure is dominated by logistics operators, vacancy levels will remain unchanged,” said Renata Osiecka.

Rents in most regions in the first months of the year remained stable; slight decreases were recorded in Upper Silesia and Poznan. In the coming months, minimum downward trend will be observed in the Wroclaw region and in Warsaw.

The figures for the first quarter allow an optimistic forecast to be made for the coming months of the year. Currently, new projects are being carried out in all major storage locations in the country. Most projects that are under way have at least one secure tenant, but a significant portion is being built speculatively.