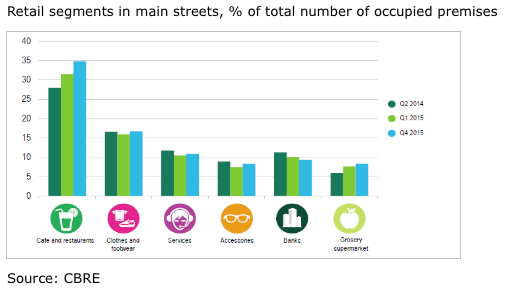 Vacancy in Moscow high streets will not decrease in 2016 – EuropaProperty

CBRE has released findings on the key trends of the Moscow street retail market for 2016. By the end of 2015 the average vacancy rate has stabilized at 8 percent, as retailers rotation in high streets has moderated.

The largest vacancy rate increase during the year has been recorded on Leninskiy Avenue, Pyatnitskaya Street and Noviy Arbat Street. At the same time the vacancy has declined in Bolshaya Dorogomilovskaya Street, in Tverskaya Street and Kutuzovsky Avenue.

Most notably, the number of cafe and restaurants and grocery supermarkets has increased over the past 1.5 years. This was a result of high activity of players that offer unique eating concepts and a steady growth of convenient grocery stores opened by chain and non-chain operators of middle and economy price segments.

The share of such segments as fashion (including accessories) and services has been almost unchanged.

Commercial terms in street retail have also stabilized largely due to the use of key approaches to optimization of street retail leasing terms and flexibility of landlords. Rental rates in rubles have not significantly changed during the year, but the range of asking rents has widened. In streets where the vacancy rate has been increasing steadily, the decline in rents has reached nearly 20-30 percent and up to 35-40 percent in some cases in dollar terms.

Key trends of the Moscow street retail market for 2016:

Olesya Dzuba, director of Strategic Analysis and Planning Department CBRE said: “2015 has become extremely difficult for the Moscow street retail market. Devaluation of the rouble, international sanctions, withdrawal of bank licenses by the Central Bank have led to lower tenant activity and a lot of existing retail units closure. Most retail chains have revised their development strategy and have optimized the business processes. Vacated premises at favorable terms have been occupied by mass-market players that are popular even during the crisis: fast food, budget cafes and restaurants, mini-markets, alcohol markets, discount stores. Generally, today most landlords are ready to provide ruble rental rates. In exceptional cases, they fix the exchange rate band and provide good commercial terms for tenants, which are mostly targeting the rent using their total rental budget.”