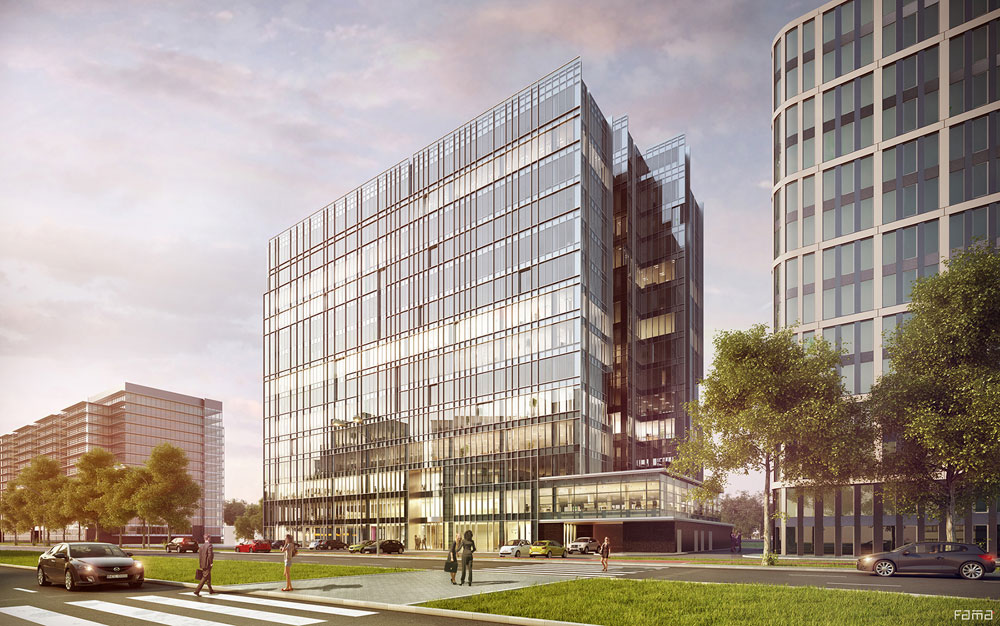 Karimpol Polska’s subsidiary CIRRUS REAL has signed a general contract for the construction of the Equator IV office tower in Warsaw, with Warbud SA. The construction work starts in October 2016 and the first tenants will move in at the end of June 2018. The building has been designed by APA Wojciechowski. The building will be commercialised jointly by JLL and Colliers.

Equator IV is a Class A building. It will rise 55 meters tall. The 14-floor tower will offer close to 35,000 sqm of total space including 20,130 sqm of lettable area dedicated to offices and 682 sqm on the ground dedicated to commercial and service outlets as well as a gastronomic offer. The building will feature 7 elevators, 226 car park spaces in four underground levels, 78 bicycle racks, as well as showers and locker rooms for bikers. 40 car park spaces will be available in front of the building. The office tower and its surroundings will be fully accessible to people with disabilities.

“It is the fourth building within the Aleje Jerozolimskie complex, which completes our investment process in the area,” said Harald Jeschek, Managing Partner of Karimpol Group. “Equator IV is a continuation of the Equator Office Park project, and it will stand out in the complex with its architecture and functions. It will feature an impressive glass façade and an elegant spacious lobby with amenities for tenants. We are also planning to landscape the surroundings of the building.”

Equator IV is a BREEAM certified building (Very Good). The building is situated so to ensure indoor exposure to sunlight in all seasons. The interior is filled with natural light from dawn till dusk. Equator is designed to create a flexible and harmonious work environment and allow tenants most flexible and efficient layout options.

The project is not the first collaboration between Karimpol Polska and Warbud SA, which was the general contractor for the office buildings Taifun, Mistral and Passat at Aleje Jerozolimskie in 2000 – 2006.

“We are pleased to build a top-class office property for Karimpol. Our role as  a general contractor is to complete the investment project timely and professionally. We are responsible for every stage of construction. We thank the investor for confidence, remain open to partnership and co-operation, and ensure that the property built by Warbud will meet the highest qualitative and environmental standards,” said Wojciech Gerber, Board Member, Warbud SA.

The building has a prime location on one of Warsaw’s main thoroughfares Aleje Jerozolimskie between the West Railway Station and the district of Ochota. There are bus stops of 13 lines directly next to the building, which is only 750 meters away from the traffic node Plac Zawiszy with tram stops of 6 lines as well as train stations of the operators PKP, SKM and WKD. It is 1 kilometre away from downtown Warsaw and 7 kilometres from the Chopin Airport.