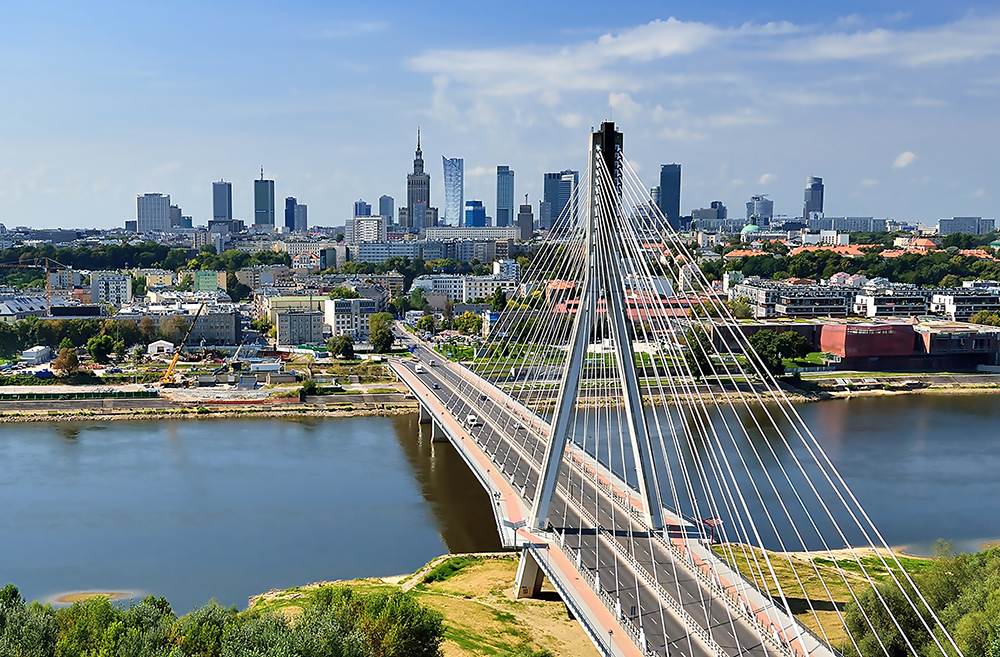 Warsaw is an amazing and vibrant city attracting a growing number of tourists by the year. Despite being virtually obliterated in the Second World War, its buildings and infrastructure were rebuilt and the city boldly entered the new century with modern architectural solutions implemented on an increasing scale. Warsaw is also benefiting from the country’s dynamic growth as Poland is one of Europe’s largest and fastest-growing economies. That’s why the city is being targeted by multinational corporates.

Warsaw has a population of around 1.7 million, a similar population to that of Vienna. With its GDP standing at 147 percent of the EU’s average, its affluence level is also close to figures recorded in Western European cities and is set to rise further. This is best illustrated by Warsaw’s commercial real estate market. Warsaw now has more than 5 million sqm of office space and will see over 855,000 sqm added to the market in the next three years, making it a leading European city in terms of office supply. Poland’s capital city maintained its growth momentum in 2017 with its vacancy rate down to 11.7 percent despite continued high supply volumes. It is an outstanding performance compared to other European markets. In addition to Moscow and Istanbul, Warsaw will see the highest levels of office completions in CEE over the next five years, as revealed by global real estate services firm Cushman & Wakefield.

In addition to the rapid transformation of the real estate market, Warsaw’s strong position and potential are confirmed by a number of rankings. Warsaw is ranked 8th according to “fDi Major European Cities of the Future 2018/19” and 23rd according to “Deutsche Bank Research Mapping the World’s Prices 2017”, indicating that compared to other major global urban locations Poland’s capital is a safe city with relatively low costs of living, affordable property prices and limited traffic congestion. In the latter ranking, Warsaw is ahead of Brussels, New York, Paris, London and Moscow. Warsaw is also one of five European cities in the top thirty of the “Tholons Services Globalization Index 2017”, ranked 23rd.

The above data may come as a surprise, given the scale of destruction in the Second World War: approximately 84 percent of all developments, including nearly the whole of the Old Town, all bridges, railway stations, airports and telephone exchanges were destroyed, 98.5 percent of street lamps, 90 percent of industrial buildings and healthcare facilities, 85 percent of the tram network, 75 percent of apartments, 50 percent of power stations and facilities and 30 percent of streets. Warsaw’s reconstruction brought out the unique features of the city and its inhabitants. There is hardly any other place with so many enthusiastic, entrepreneurial and industrious people. Warsaw inhabitants have demonstrated that nothing is impossible. This energy is now recognized in business, confirmed by the above rankings and the large scale of new developments, including projects creating modern public and cultural spaces such as: Browary Warszawskie, the Museum Citadel at the Warsaw Citadel, the Museum of Modern Art, the Centre of the Copernican Revolution at the Copernicus Science Centre, an extension of the Vistula Boulevards and a footbridge across the Vistula River. These projects will make the city even more friendly to its inhabitants, businessmen and tourists alike. Warsaw is also seeing an unprecedented office building boom with schemes underway comprising Varso, The Warsaw Hub, Spark, Generation Park, Cedet, Centrum Marszałkowska, Spinnaker and Towarowa 22.

Richard Aboo Partner, Office Agency, Cushman & Wakefield said: “Warsaw’s vacancy rates are likely to come under pressure due to low office supply in the next two years and rising absorption and take-up levels. This is leading a number of developers to bring some projects forward in order to capture the healthy occupier demand.”