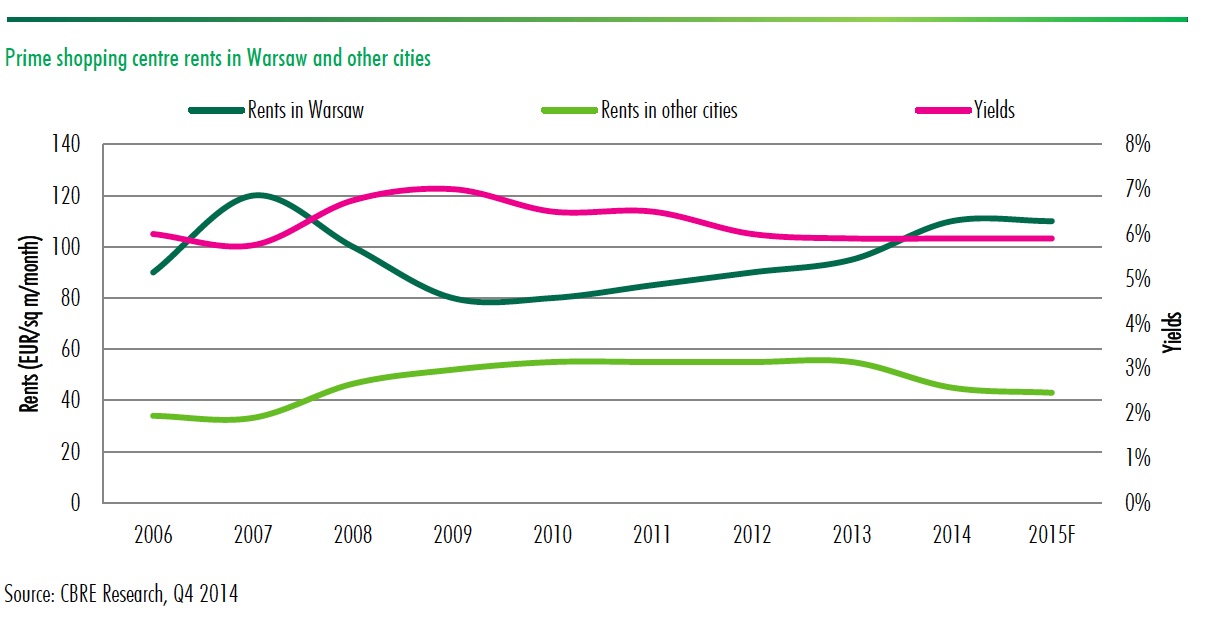 The retail property market is dominated by small retail formats located in cities with a population of 200 000, rents remain stable, while international brands entering the Polish market tend to choose Warsaw; these are the conclusions reached in the “Poland Retail Market View Q4 2014” report drawn up by the research team at CBRE.

The largest new developments launched that deserve a mention include Atrium Felicity in Lublin (73,000 sqm) and Galeria Warmińska in Olsztyn (41,000 sqm).

Katarzyna Kocon, Consultant, Research and Consultancy Department, CBRE, commented: “We are observing an ever increasing diversification and a move beyond the accepted formats with respect to both developers of new retail facilities as well as tenants. New facilities emerge with a more mixed offer than the traditional shopping centre concept, while additionally, retail chains strive to provide a more varied range of goods and services. These measures are a response to the growing expectations and demands on the part of consumers for whom a comprehensive offer and time spent shopping are of increasing importance.”

2014 saw the introduction to the Polish market of 20 new international brands. Warsaw was the first-choice location for the majority of new tenants, with Celio, NEO and Kiko Milano deserving of a mention.

Magdalena Frątczak, Director, Retail Department, CBRE, commented: “After a year dominated by launches of shopping centres and 17 smaller developments that fit in the convenience and retail park trend in smaller cities, the new year will bring a greater number of new developments in agglomerations and large cities. However, as it became a frequent occurrence to surrender or suspend new developments, developers are now taking greater care when analysing the location and target group for future investments, for when dealing with an extremely competitive and demanding market they cannot afford to make any mistakes.”

Rents remain stable, however a slight downward trend is noticeable in respect of average rents. At the moment, rents in prime locations in Warsaw are in excess of €100 sqm per month, while rents for the most expensive space in the most attractive centres outside of Warsaw amount to approximately half of that.