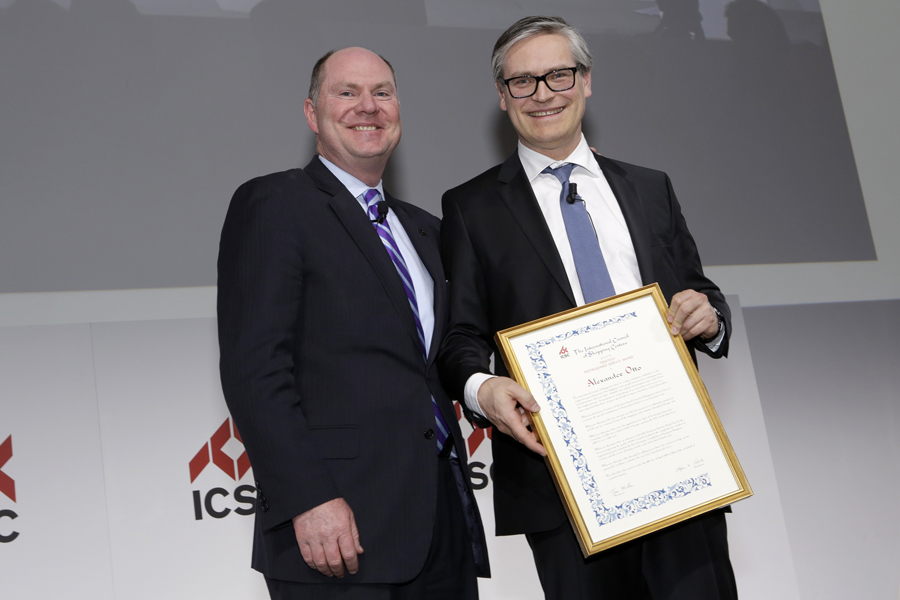 The decision to award him this honour was made with the unanimous approval of ICSC’s worldwide Board of Trustees, which met in Florida in January. It was presented at the ICSC European Conference taking place this week in the Italian city.

The Trustees Distinguished Service Award is ICSC’s highest honour and is the association’s only and most prestigious official recognition of distinguished service and contribution to the association and to the worldwide retail real estate industry. In the 59-year history of ICSC, only a small group of the industry’s most outstanding individuals have been selected to receive this honour.

Tom McGee, President & Chief Executive Officer of ICSC, commented: “We are delighted to award Alex the Trustees Distinguished Service Award in recognition of the outstanding role he has played in moving our industry forward in Europe. Alex has always given his complete support to ICSC and he has been an icon in the retail real estate industry.”

The award is given to ICSC volunteers who selflessly commit their time and knowledge to ICSC in order to help advance its programmes, services, and industry stewardship. They are the solid backbone of ICSC who serve as committee members, faculty or other volunteers, giving back to our industry in often quiet, but incredibly impactful ways. It is symbolically a lifetime achievement award that a volunteer, who is devoted to the cause, often for several decades, can receive from the Board of Trustees.

Alexander Otto was born in Hamburg in 1967. After obtaining his international baccalaureate (IB) in Oxford, he studied at Harvard University and Harvard Business School. Otto was appointed Chief Executive Officer of ECE in 2000. He has been an ICSC member since 2000 and became the Chair of both the European Advisory Board and the European Executive Committee in 2012 until his term ended in 2015. Under Otto’s chairmanship, ICSC flourished in Europe growing from 1,900 members to over 7,000 at the time of his departure.

Otto also helped increase engagement with industry CEOs across Europe, growing the CEO Forum from 15 CEOs to more than 40.

Alexander Otto commented: “It is truly an honour to be given this award by the ICSC Trustees. With its more than 7,000 members in Europe ICSC has become the most relevant organisation supporting our industry and I’m proud to have been a part of the great work that the organisation does to promote the sector.”