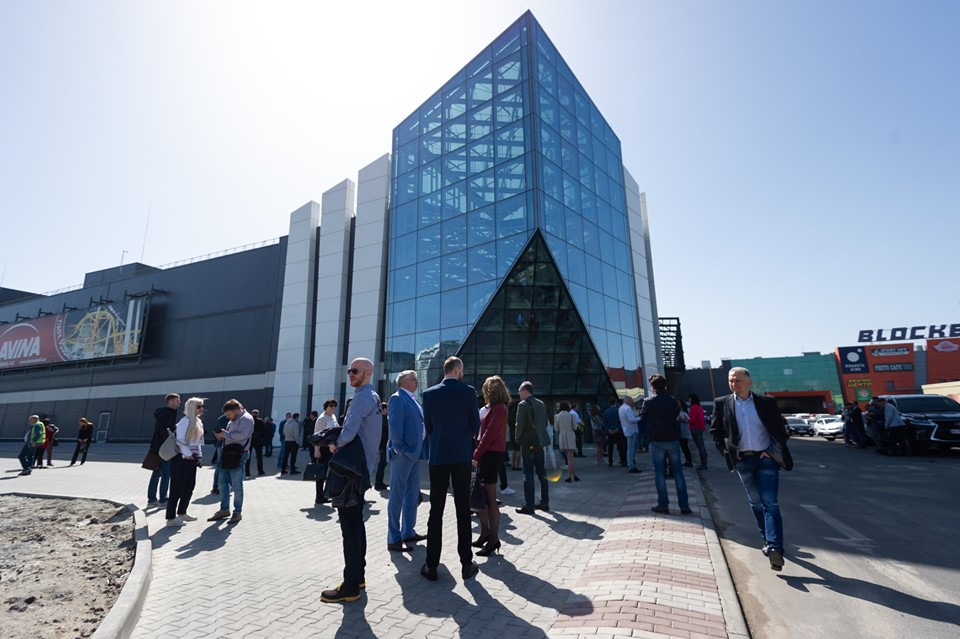 On May 31st the Blockbuster Mall will open its doors. In this relation, Mandarin Plaza Group and NAI Ukraine held an event for the retailers. The presentation of the megamall with a “Hollywood” name took place in the appropriate location: in the cinema hall. Over 150 retailers attended the event.

The shopping mall tour, speeches of representatives of the industry, communication with the landlord and top managers of the megamall – the meeting were held in a friendly, businesslike atmosphere.

Vagif Aliyev told about development plans of the megamalls network, about the role of entertainment in the Blockbuster Mall, which will be one (but not the only) component of the success of the shopping and entertainment center and the megamalls network in general. Thus, according to the developer, every district of Kyiv will have one megamall. In addition to Lavina Mall and Blockbuster Mall, the network includes the Ocean Mall to be open at the end of this year, Hippodrome Mall and Lesnaya Mall. Others will be announced later.

According to Vagif Aliyev, a large-scale and strategic approach to the development of shopping and entertainment centers allows the developer to offer retailers a comprehensive expansion roadmap.

According to Vitaliy Boyko, which acts as an exclusive broker of the megamalls, NAI Ukraine has been supporting projects of the Mandarin Plaza Group for many years, and every new project of the company offers the market higher quality. Vitaly noted that all of the megamalls would be opened in areas with high population density. Moreover, starting with Ocean Mall, the developer will develop projects in close proximity to the subway.

Blockbuster Mall is also in a great location – at the intersection of huge passenger traffic in the northern part of the center of Kyiv. According to the DPT, more than 5 million sqm of residential real estate is planned to be built here in the near future.

Even before the opening, Blockbuster Mall received the prestigious international European Property Awards in the category Retail Development for Ukraine.

The format of the mall – retail resort – assumes that in the shopping and entertainment complex the consumer will find restaurants for every taste, the best entertainment and all the brands he or she needs.

In Blockbuster Mall, all fashion groups represented in Ukraine will open stores in the latest formats and in large areas.

Carefully thought out tenant-mix includes the most popular and high demanded brands. At the moment, 70 percent of contracts have already been signed, with another 20 percent at the signing stage. Thus, 90 percent of the space in the mega-mall is occupied by tenants.

It is worth mentioning that all stores in Blockbuster mall will be presented in modern formats. As an example, each of the six fashion boutiques of Fashion Retailer UltraGroup (Levi’s, Guess, Superdry, Hugo, Karl Lagerfeld, Baldinini) will be opened with the unique for Ukraine concepts and design.

What do opinion leaders tell about Blockbuster Mall?

An important indicator of the success of the strategy and the work of shopping malls of the network of megamalls are reviews of strategic partners and retailers.

According to Anton Shishkin, the synergy of the entertainment center and the Blockbuster Mall shopping center will be advantageous for all market participants and consumers. In total, the entertainment zone of the two centers is more than 100,000 sqm. For many visitors, this will become a powerful magnet and the main purpose of the visit.

Andrei Shutko, a development director of one of the largest grocery store chain Fozzy Group admitted that Vagif Aliyev had strategic thinking in implementing the project of the megamalls network. The Fozzy Group company is one of the key partners of the Mandarin Plaza Group. Le Silpo supermarket successfully operates in Mandarin Plaza shopping center, and Silpo hypermarket operates in Lavina Mall shopping center. Andrei Shutko expressed confidence that the cooperation of the retailer and the developer will continue in the upcoming projects.

Marina Naboka recalled that the success of the shopping and entertainment center depends on the teamwork, based on the joint efforts of the developer and tenants. She wished the audience well-coordinated teamwork, speed, and competence.

Other participants of the meeting, leaders of the retail market, shared their impressions of the shopping and entertainment center.

Alexander Nikitin, development director at Calzedonia Group, noted that the Blockbuster Mall is the next generation mall and its opening will be a big event for Ukraine.

Dmitry Snezhko, founder of the official representative office of Pierre Cardin and Tom Tailor in Ukraine said that his company is going to open the latest formats of mono-brand stores in the project of Mandarin Plaza Group.

Dmitriy thinks that a location with good traffic, including those with existing traffic to the entertainment center in close proximity to Blockbuster mall is a big advantage.

Dmitry said that he was impressed by the entertainment zone and singled out the role of one of the anchors, the flagship Silpo. During the tour, retailers were able to assess the scale and attractiveness of the hypermarket, which will become the main grocery store of a new format in the city.

Tatiana Lakhtadir, director of the Ukrainian largest retail chain of toy stores Budynok Igrashok noted that the shopping and entertainment center is amazing in scope and quality. She is confident that it is a success. Moreover, the location and infrastructure issues properly resolved by the developer will play a key role – in particular, the presence of a bypass road and high-quality parking.

It should be noted that the majority of participants came to the conclusion that it is indeed one of high-quality and strategically-designed objects of the network of megamalls that will distribute the main turnover of the city in the near future.

Retailers about Blockbuster Mall in Video