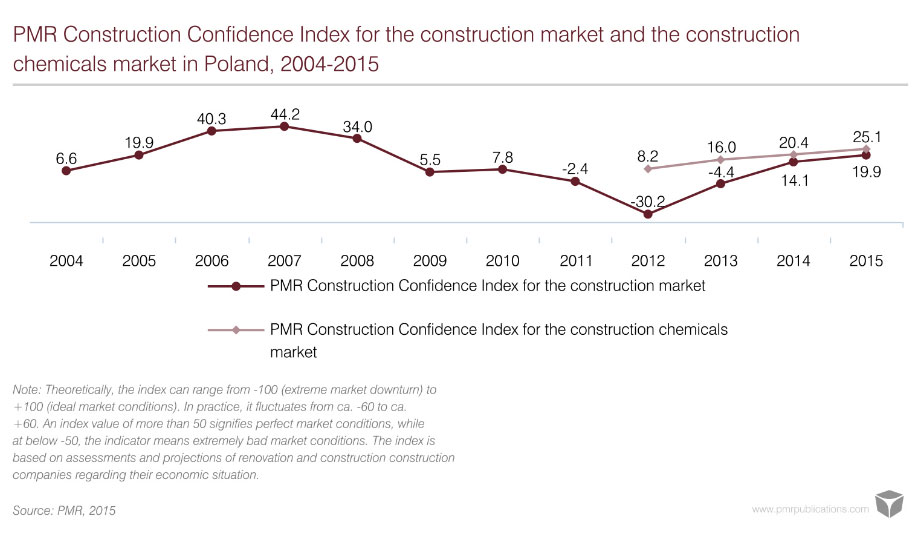 Following better-than-expected performance in 2014 (a 2 percent increase rather than a 1 percent drop), in 2015 the construction chemicals market reported growth of approximately 5 percent, with the segments of masonry mortar and thermal insulation systems being the strongest growth drivers.

The outlook for residential construction is very positive on the back of high sales of new flats built by developers in 2015 (up by over one-quarter) and a recovery among individual investors (6 percent growth in housing starts and a 15 percent surge in building permits). After the market reached 14 million sqm in 2015, we expect the annual area of new projects to increase to 16.5 million sqm in the 2016-2017 period.

As every year, the surveyed renovation and construction companies were asked about their current financial standing, the expected financial positions in the next 12 months, the value of the backlog and their headcount. Based on responses we receive, we are able to prepare the Confidence Index for the Polish construction chemicals market. In the December 2015 survey, the Business Conditions Index for the construction chemicals industry in Poland stood at 25.1 points, which signifies improvement over 2014.