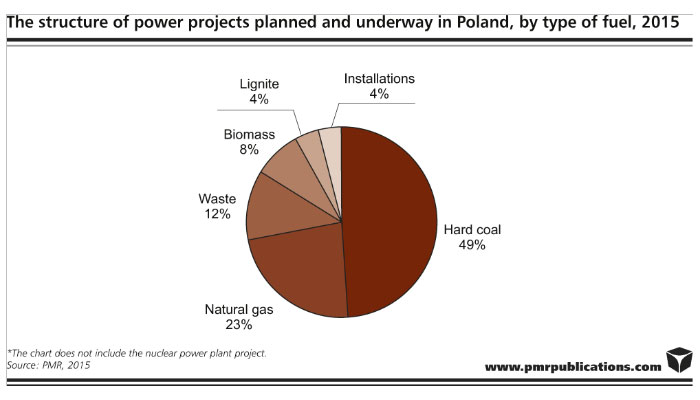 As ageing power-generation sources operated in Poland need to be replaced with new ones, the output generated by power generation projects steadily grows from year to year. The robust upward trend is also reflected in the statistics – construction and assembly output generated by industrial construction projects tripled to PLN 6.7 billion (€1.6 billion) over a decade. Moreover, the segment is expected to see continued growth in the coming years.

Following a period of slow growth in 2013, last year the activity of investors operating in the industrial construction market surged, mostly on the back of fast-paced implementation of several major power projects, according to PMR’s latest report entitled “Power sector construction in Poland 2015-2020. Investments – Companies – Statistics – Forecasts – Prices”. The market expanded by nearly 25 percent. Furthermore, PMR researchers expected that the sector covered in the report will see growth of approximately 10 percent in 2015, which should be viewed as a good result due to a high base of comparison.

Nearly half of all power plants’ boilers in Poland have been operated for over 30 years, while one-third of them are 20-30 years old. Since the age structure of power infrastructure raises serious concerns, Polish power groups have made efforts to change it by preparing and executing numerous projects involving the construction of new power-generation units. While not all of the many projects planned will come to fruition, even the small portion that will eventually be put in place will significantly boost backlogs of contractors specialised in this field.

The tendency is confirmed by the growing value of construction and assembly output. PMR researchers believe that the trend will continue on the back of the contracts which have been concluded to date and several additional projects planned for the coming years. A closer look at the structure of capital spending also reveals that upgrades of existing power plants bear less relevance to the sector’s growth. The share of renovation projects declined from about 40 percent to 25 percent of total construction and assembly output over the past decade. On the other hand, the proportion of output generated by capital expenditure projects has been on a rapid upward curve.

PMR researchers also investigated issues as to what feedstock should be the primary fuel for the power industry in Poland. It appears that hard coal will remain the dominant fuel in Polish power production (almost half of the value of projects underway and planned), though natural gas-based represents a rising share of the market (23 percent). Four large-scale gas-based projects are currently in the tender stage (Lagisza Power Plant, Zeran CHP Plant, Grudziadz CHP Plant and Bydgoszcz CHP Plant). The total estimated value of the projects tentatively scheduled for completion in late 2018 or early 2019 is PLN 8 billion (€1.9 billion).

The idea of projects using natural gas as a feedstock is also supported by lower construction costs and shorter project delivery times. This scenario is also driven by the prospect of gas market deregulation in the long term, which can have a positive effect on natural gas prices.