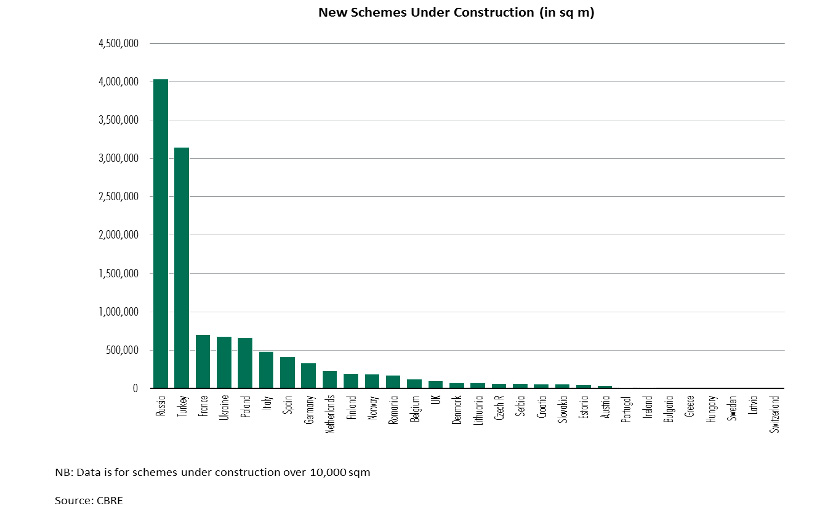 During H1 2015, the total amount of new shopping centre space completed across Europe stands at 1.36 million sqm and just under 12 million sqm under construction, with Russia responsible for over half of completions. Russia and Turkey have a combined total of 7.18 million sqm of shopping centre space under construction. Activity in Turkey has been driven by an increasing affluent young population, whilst Russia benefits from a number of cities with large middle class populations.

However, the overall levels of completions and space in the pipeline are starting to decrease due to a slowdown in Russia and Turkey. The scale of Russian and Turkish development naturally impacts the overall level of construction in Europe due to the large volume of space under construction in these markets. Turkey’s shopping centre market has gone hand in hand with the country’s economic growth – with 81 percent of Turkey’s entire stock delivered in the last decade.

In H1 2015, the number of completions in Turkey began to dramatically slow down with only 84,200 sqm in gross leasable area resulting in approximately only 11 percent of the planned new openings for the first half of the year being actualised as scheduled. In most cases, the current economic climate has seen the delivery dates of many projects strategically extended until Q4 in line with the forecast stabilisation of the Lira towards year end. Nevertheless, the elevated retail density in many urban catchments has left only marginal room for further new development. This has seen a marked decrease in dedicated retail developments and even a reduction in the allocated construction ratio, and resulting configuration, of retail in mixed use schemes.

In Russia a number of schemes have been coming to market with large volumes of vacant space due to slow down in demand from retailers.

Natasha Patel, Associate Director, EMEA Retail Research, commented: “In Russia although there is a great deal of space under construction, a large proportion is being delivered to the market with significant levels of vacant space through “technical openings” where the centre opens for trading with between 30-70 percent vacancy. Vacancy rates have been reduced in the last few months by the willingness of landlords to be flexible when negotiating lease terms.”

Elsewhere in Europe, levels of construction remain largely unchanged which is ongoing across the board. Within Western Europe, France (704,451 sqm), Italy (485,500 sqm) and Germany (332,700 sqm) have the largest pipeline of space under construction. Development activity within Italy is gradually improving with a number of schemes moving from being on hold or in planning, to under construction. Western Europe continues to be characterised by a large deal of extensions and refurbishments to existing schemes as a way of revitalising existing centres.

In Germany, planning permission for large-scale retail is hard to achieve, since there are already significant developments. Due to this restriction there will be limited development in city centres and virtually none out of town.

Maxim Palt, Senior Consultant of Research Department, СBRE in Russia, said: “Out of more than 4 million sqm of retail space under construction, 1/3 accounts for Moscow and the Moscow region and 2/3 for the regional cities. Due to influence of economic difficulties, weakening consumer demand and the reduction development plans of retailers, new delivery in Russia will be 15-20 percent below the historic highs in 2015-2017. In the case of the deepening economic recession and its continuation in 2016, the volume of new supply may be reduced by 35-50 percent. The strongest decrease of new delivery will be a reduction in small towns with less than 500,000 inhabitants – new supply in these locations will be 66 percent below the amount seen last year. As part of the positive scenario of improving economic activity in Russia in 2016, new delivery in such cities can increase by 80-100 percent and remain on the high level during the next years.”